Week 11: Get To Know Your FADS Team 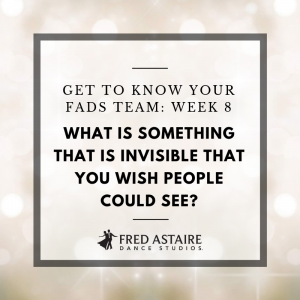 Question: “What is something that is invisible that you wish people could see?”

Alexis:  It would be cool to see through all of the darkness in space; the molecules in the empty space out there.

Jason:  Germs. So we wouldn’t get sick so often.

Sydney: I wish that people could see compassion because we humans are very complex and don’t always express emotions in the best of ways.

Kaylee: I want them to see my Love!!! Or how loved they are Or have them see my sarcasm like a vivid moving picture.

Clarice: Something invisible that I wish people could see is mental illness. Being able to understand what is going through someone’s mind would be important for ending the stigma against mental illnesses.

Karli: How good of a heart/person people are, As well as someone not having a good heart. (Visa versa

Anthony: My first thought was truth, but that wouldn’t be any fun.  We would never be able to enjoy surprise birthday parties if everyone can see the truth :P!  So I choose JUSTICE!

Justin: I think being able to see in multiple wavelengths of light, plus being able to perceive light at a greater level would be cool. Most pictures of planets and our galaxy are made through compositions of photos from multiple types of light, so it would not look like to the naked eye. Also, most pictures of the Milky Way can only be seen through long exposures, as our eyes can not pick up that level of light. It would be amazing to be able to have a night under the stars and be able to see entire galaxies in their full beauty.

Steffany: Although my mind immediately wants to answer “Flatulence”, my heart wants me to respond with, Intentions.  I would say emotions, but that’s private, and sometimes you can’t control the emotions that run through you. So, intentions is my answer so that you can see to the heart of someones words and actions.

Philip: I would like to be able to see thermal energy . I just think it would be cool.

Denise: I want eyes that can see like a mantis shrimp because they have more color-seeing cones in their eyes and theoretically see colors we can’t even imagine. (I think it was the mantis shrimp…, the one that can pop its claw and stun its prey with a mini shock-wave.)