Week 2: Get To Know Your FADS Team

Each week we’ll be asking the members of our Alamo Heights team a question to help you get to know us better!

We’re kicking off August with this question: “If you could have any super power, what would it be and why?” 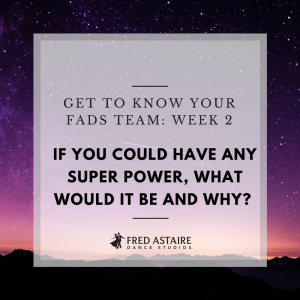 Teleportation- At the snap of my fingers, be wherever I wanted. I could travel, and see the world. Or, be with my family whenever I wanted. Plus, no car note, gas, or insurance

The ability to find other people who have superpowers and extract them from their brains like the dude from Heroes.

I would have the superpower of telepathy. I would talk telepathically to people to make secret alliances in games….like risk

This is such a hard question, because there are so many I’d love to experience! I would want Power Mimicry. This would allow me to mimic powers of those I come in contact with, while keeping their own powers active. Because of this, I could have powers such as: healing others, telepathy, atmokinesis (control of weather), telekinesis, omnilinguism (speak all languages), flight, strength, speed, teleportation, and invisibility. I would love to experience them all, EXCEPT precognition. I wouldn’t like to be able to see the future.

I want the superpower of controllable flight!  Firstly, this would be invaluable for recon.  I could fly straight up into the air when traveling or stuck in traffic and let my friends know where we are and the best route to take.  I can find things easier in large crowds, or avoid them entirely.  I could also use this power to increase my swim speed by flying through water as well making swimming and water parks a lot more fun.  I would probably also use this power for mischief in ways including, but not limited to, taking skydiving lessons and pretending to forget my parachute so the instructor panics and tries to catch me while I laugh maniacally.  I could also use this power to hang from the ceiling like a bat and convince children that I’m a vampire or Spiderman or something else that’s awesome.

Flying –  it would make it a lot easier to get to all my studios and avoid all the traffic .

Super Healing. Physiological & Emotional, because I hate seeing people suffer. It breaks my heart to see others hurting.

If i could wake up tomorrow with a super power it would the ability to instantly manifest. Through simple thought I would like to be able to create my hearts desire and fulfill my greatest needs; whatever they may be.

I would choose this ability because though I feel we all have to power to manifest if manifestations were instant it would force me to draw attention towards my everyday thoughts both negative and positive; causing a very reflective look into what exactly I attract.
In an instant I would be wherever I wanted to be, have whatever I needed, and being the artist that I am, create the beauty in the world I would love to see.

Fully controlled telekinesis, because moving things with my mind would be dope. But the buzzfeed quiz I took said I’d have instant lava whenever I want (I’m assuming the lava wouldn’t burn me and I could control how much).