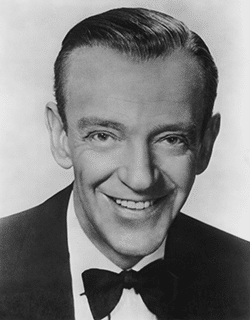 Ginger Rogers is likely the dance partner we think of first, but Fred Astaire, our co-founder and namesake, was fortunate to have performed and starred with numerous well-known & talented dancers, on both stage and screen during his career. This blog post highlights the stories of two of Astaire’s esteemed dance partners – George Burns and Joan Leslie – both of whom have birthdays in January.

Born on January 20, 1896: American actor, comedian and dancer George Burns. He (along with his wife & stage partner, Gracie Allen) starred and danced with Fred Astaire in 1937’s “A Damsel in Distress”. Astaire played an American dancer visiting London with his publicist (Burns) and his dizzy secretary (Allen), who falls in love with the heroine (the rebellious Lady Alyce Marshmorton, played by 18-year-old Joan Fontaine). The inspired levity of Burns and Allen is one of the great pleasures of this film. On loan from Paramount, both were fine vaudeville-era dancers. One number, “Put Me to the Test,” in which Burns, Allen and Astaire are all armed with whisk brooms, was even designed by Burns. Remembering a show-stopping vaudeville act that used whisk brooms, he bought the rights to the routine and showed it to Astaire, who loved it, so Burns taught it to him. Joked Burns: “He picked it up real fast, that boy’s a pretty good dancer!” Burns and Allen told jokes on their radio show for weeks about working on “Damsel”. When asked how she rated herself as a dancer, Allen replied, “I’d say I’m between the world’s best dancer and the world’s worst cluck. I have to dance between Fred Astaire and George.” And George recounted, “I wasn’t going to lose a chance to work with Fred Astaire. Look what it did for Ginger Rogers.” In 1996, Burns died in his Beverly Hills home, at the age of 100. Enjoy the tap dance routine from 1937’s “A Damsel in Distress”.

Born on January 26 in 1925: American dancer and vaudevillian actress Joan Leslie (born Joan Agnes Theresa Sadie Brodel), who starred with Fred Astaire in 1943’s “The Sky’s The Limit”. As a teenager Joan got her big break in 1941’s “High Sierra” with Humphrey Bogart. In the early 1940s, Fred Astaire was finding it hard to make a film that compared to the box-office smashes he’d had with Ginger Rogers in the 1930s. “The Sky’s the Limit” (1943) was his third film without Rogers, and gave audiences a more dramatic type of Astaire character. John Mueller, in his book “Astaire Dancing: The Musical Films”, called it “Fred Astaire’s dark comedy”. Another departure was that all the film’s dances were choreographed by and credited to Astaire alone (as he generally worked with collaborators). In the film, Astaire plays a famous ace war pilot who, while awaiting reassignment in NYC, changes to civilian clothes to remain incognito. He falls in love and become engaged (when she proposes) to an attractive news photographer, played by Leslie. Astaire declines, knowing he’ll soon return to the war – but of course, there is a surprise reconciliation just as he is about to fly off. Critics appreciated his dramatic role, but wrote that “Fred Astaire is a very thin fellow, but why emphasize it in a film so thin that daylight shows all around him – just daylight and Joan Leslie, that’s all?” His co-star fared little better. “Mr. Astaire and Miss Leslie work hard for slight effect. For the simple fact is that Miss Leslie, while a gracious and neatly attractive miss, is not a Ginger Rogers when she tries to make with her feet.” By 1946, Leslie sought more serious roles and took Warner Brothers to court to get released from her contract. As a result, she was blacklisted from major Hollywood studios, & mainly worked with B-list studios after that, receiving critical acclaim for her performances. In the 1950s, Leslie chose to focus on raising her daughters, but continued making sporadic appearances in movies and on television. She retired in 1991, and died in L.A. in 2015 at the age of 90. Enjoy this scene with Astaire and Leslie, from “The Sky’s the Limit”.