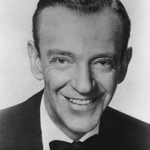 Beyond his own talent, Fred Astaire’s success as a professional dancer wouldn’t have been possible if not for his numerous, talented dance partners. Our co-founder and namesake was fortunate to have starred with numerous dancers, on both stage and screen. This post celebrates three of his dancing co-stars with October birthdays: Claire Luce, Rita Hayworth and Barrie Chase.

Born on October 15, 1903: American stage & screen actress, dancer and singer Claire Luce. She co-starred with Fred Astaire in the original Broadway musical “Gay Divorce” (1932), and was his first dance partner after he’d ended his 25-year partnership with sister, Adele Astaire. She was also his last partner on Broadw ay, as he soon after moved on to Hollywood. Astaire tried to get Luce for the 1934 film version of the play, but was overruled by RKO Radio Pictures which instead chose their contract player, Ginger Rogers. Critic Brooks Atkinson wrote, of Luce’s performance, “Fred Astaire has found a partner who can match him step for step and who flies over the furniture in his company without missing a beat.” In his autobiography, Astaire credits Luce as the inspiration for his revolutionary “Night and Day” dance routine: “Claire was a beautiful dancer and it was her style that suggested to me the whole pattern of the “Night and Day” dance. This was something entirely different from anything Adele and I had done together. That was what I wanted, an entirely new dancing approach.” Born on October 17, 1918: Hollywood starlet Rita Hayworth. Before “Gilda”, she was perhaps best known as a WWII “pin-up girl”, but Hayworth once said of herself, “I’ve never really thought of myself as a sex symbol, more as a comedienne who could dance.” Rita Hayworth’s background was almost exclusively in dance; and dance played an important role throughout her career and personal life. Ms. Hayworth starred, and danced, with Fred Astaire in two movies, “You’ll Never Get Rich” and “You Were Never Lovelier”. For more information on Rita Hayworth and her love of dance, click here. ballet as a child. She started her professional career at age 16 in the chorus of Hollywood musicals (including two Fred Astaire films: 1955’s “Daddy Long Legs” and “Silk Stockings” in 1957). Nearly 10 years later, while working as Jack Cole’s assistant choreographer at MGM, Fred Astaire asked her to be his dancing partner on his “An Evening with Fred Astaire” TV show. She made four appearances as Astaire’s partner in his TV specials between 1958 and 1968. On working with Fred Astaire, Barrie offers, “Dancing with Fred Astaire and not learning anything from him would be the same as working with Michelangelo and saying you’re becoming pretty good as a stone chiseler.” Click here to view a interview with Barrie Chase, conducted during Fred Astaire World Championships 2014 in Las Vegas, and click here to view the FADS Dance Blog post about this special interview.

We think these stories provide wonderful insight into the man, his talents and his exceptional career. Enjoy this entry, and browse the FADS Dance Blog for more profiles of Fred Astaire’s dance partners. Then, contact us at Fred Astaire Dance Studios, & start dancing!