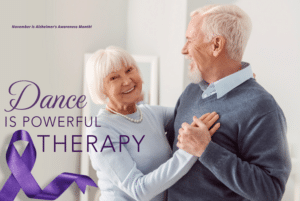 November is Alzheimer’s Awareness Month. President Ronald Reagan designated it so in 1983 and we are honoring that at our Fred Astaire Dance Studio. According to the Alzheimer’s Association, there were fewer than two million people with this insidious disease in 1983 – that figure in the U.S. now is 5.5 million, with 5.3 million being 65 years of age or older.

Ballroom dance can be an effective (& fun!) therapy for those impacted by the symptoms of Alzheimer’s, and it’s even more impactful when enjoyed with a loved one.

Help us step up in this battle. Help us as we generate as we continually raise awareness of Alzheimer’s and the impact of dementia.