While many Thanksgiving traditions are on hold, Fred Astaire Dance Studios is pleased that the Macy’s Thanksgiving Day Parade, showcasing numerous dance performances and musical guests, is slated to continue. 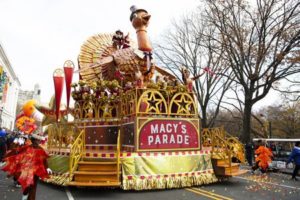 The Macy’s Thanksgiving Day Parade is typically held every year on Thanksgiving morning along the streets of New York City. The televised event features a host of dance performances, marching bands, musical guests, and is recognized worldwide for its giant inflatable balloons of beloved cartoon characters. The parade ends with the arrival of Santa and Mrs. Claus on their sleigh and is heralded as the start of the Christmas season. Crowds of nearly 3.5 million line the 2.5-mile parade route to watch the performances. More than 50 million viewers turn on their TVs on Thanksgiving morning every year to watch the festive event.

Given current social distancing guidelines and limits on public gatherings, Macy’s Department Store partnered with the City of New York to develop a way to safely host the Thanksgiving tradition this year. To ensure a safe experience, Macy’s shortened the parade route for balloons and floats and many performances will be pre-recorded for broadcast on television and online. This year’s parade will feature performances by Dolly Parton, Jordin Sparks, the New York City Ballet, the Band of the New York City Police Department, and more.

“Macy’s believes in celebration and the joy of marking milestone moments with family and friends. For nearly 100 years, Macy’s Thanksgiving Day Parade has been synonymous with the official start of the holiday season in the United States. Under the unique challenges of these unparalleled times, we felt it was important to continue this cherished American tradition that has been the opening act to the holiday season for generations of families,” the company said in a statement.

The performing arts community has been hit hard by the pandemic. Many theaters had to cancel performances to protect their patrons and employees. Fred Astaire Dance Studios launched an Online Lesson Platform to ensure its students could continue to receive dance lessons while some of its studios were closed. The Macy’s Thanksgiving Day Parade marks a positive step forward for the arts community, and Fred Astaire Dance Studios will be tuned in on Thanksgiving morning to watch all of the performances.

Take a walk down memory lane and check out some of these performances from Macy’s Thanksgiving Day parade from years gone by.

The Radio City Rockettes performed in last year’s parade. The high-kickers dressed as reindeer and danced to a variety of Christmas tunes.

This fast-paced performance features dancers from the Broadway musical “On Your Feet.” The play is based on the real-life story of singer Gloria Estefan and her husband.

To give people a taste of what they might expect performances to look like this year, check out this clip. The National Dance Institute paired with Sesame Street to kick off the parade with a performance that took place both off-site and in front of Macy’s Department store.

If the performances in the Macy’s Thanksgiving Day parade inspire you to hit the dance floor, your local Fred Astaire Dance Studios has a wide variety of lessons designed to appeal to dancers of all ages and stages. Learn to tango, waltz, or samba with a certified dance instructor, or treat the special someone in your life to a date where you dance the night away by learning the foxtrot.