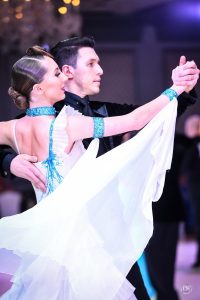 Ava Jacobs says ballroom dance has made her taller. “I’m used to looking down,” says the 14-year-old 8th-grader at The Academy of the Sacred Heart in Bloomfield Hills. “Now, I look much more confident.”

And she says it’s all because of ballroom dance.

After being inspired by a friend’s Snapchat video of himself and his girlfriend swing-dancing, Ava told her mother, “I want to do that.”

A fan of the movie Hairspray, she already admired the ease and grace of partner-dancing, but her friend’s social post pushed her to want to take action. She and her mom started searching for ballroom dance studios in the area, and they landed here at Fred Astaire Dance Studio.

An ambitious teen, when Ava isn’t maintaining her grades, her life is focused on the arts.

She studied classical singing for four years. She’s played piano since age 7. Recently, she’s discovered a love for fine arts – watercolor painting. She won artist of the year at her school, and took Top 50 in the state.

Clearly, Ava is a kid who not only tries new things, but excels when she does. Which is why it’s no surprise that she brought gusto and style to ballroom dancing and eagerly competed in the Michigan Dance Challenge alongside many adult students from our studio earlier this spring.

Her first competition, though, was an in-studio event in December of last year. Nervous, she admits it was a little daunting, but she came out on the other side more confident about her abilities and her comfort with competitions. 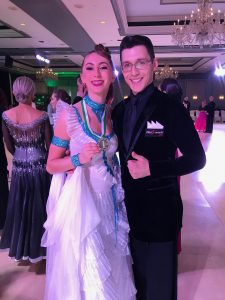 It was an easy leap to compete at the MDC, then. “I didn’t feel nervous at the MDC because I knew what was going on,” she says. Ava took home two first place championships in the Junior division, dancing Waltz and Tango with partner Tamerlan Gadirov, a FADS dance instructor. 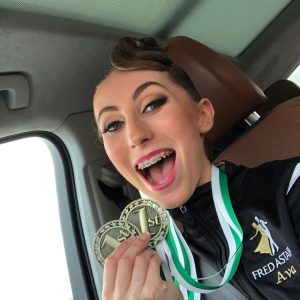 “In ballet, you have to stay in between the lines and focus on your bubble,” she says. “Ballroom dance is much more collaborative. You have to focus on what your partner is doing and how you can incorporate yourself into it. It’s self-discipline with a social aspect.”

“I really like the cha cha at the moment,” Ava says. “It makes me think of ballet, which makes it easier to remember the steps.”

She loves all fast dances. “Because ballet is more fluid, I find it fun to switch it up. I don’t always want to do the same thing over and over again.”

The Importance of Community

But while she’s a brave and talented teen, Ava Jacobs admits it isn’t easy to try something new – especially walking into a dance studio where you know no one. Still, she encourages all people to give it a try.

“When I started at FADS, I was really nervous,” she recalls. “I didn’t know if there would be anyone my age. But everyone was so welcoming and warm. I’ve grown to love all the adults in the studio.”

And we love her.

The community aspect of ballroom dance has been one of the greatest parts for Ava – and for almost all our students.

“I really like Irena because she always says ‘Hi’ when I walk in and Yuliya has become like a ballroom dance mom to me.” Ava feels encouraged and supported by her dance instructors.

“The community here builds you up,” she reflects. “I was stressed during the first in-studio competition because I didn’t realize you were supposed to be having fun. Instead, I was taking it so seriously. It’s not about being serious; it’s about having a good time. Winning is cool but it’s not the main focus.”