From Tragedy to Triumph: Nataliya Kolesova’s journey to become a champion Para Dancer

Robert Frost once wrote, “…the best way out is always through.” 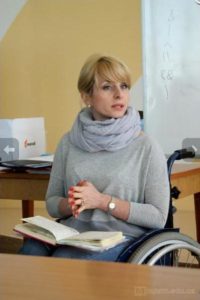 This meaningful lesson embodies the journey Nataliya Kolesova took down a path of life-changing heartbreak, inspirational determination, and new and unexpected opportunities.

On a warm and sunny June day in 1996, Nataliya’s world changed forever, after a car accident left her unable to walk. At just 21, she had been an active wife, mother, and teacher in Rivne, Ukraine. 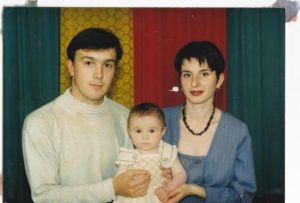 After the accident, she was hospitalized and unable to care for herself. Nataliya couldn’t walk or bathe herself.

She began on the road to recovery but less than a year into it, a member of her medical team dropped her while transferring her from chair to bed. The fall worsened an already debilitating condition. Too weak and thin for any type of spine-saving surgery, doctors predicted she would never sit upright again. 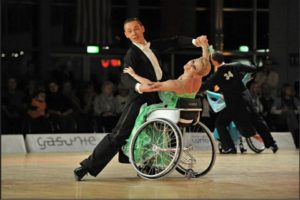 Feeling helpless, Nataliya reflected on her grandmother’s life. Permanently disabled after time in one of Stalin’s labor camps, her family hid her behind closed doors, as if she didn’t exist. Nataliya feared that was her future. Despite supportive family and friends, she fell into a dark despair and depression.

Her daughter Katia, age 2 at the time of the accident, pleaded to go to the zoo or to spend time outside for fun and adventure. Nataliya cried, feeling helpless to care for herself or her daughter.

“Will Mama cry every day?” her daughter asked at one point. 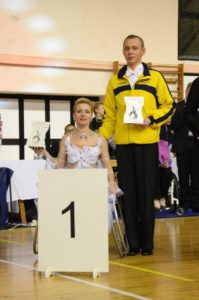 That question was a wakeup call that launched Nataliya’s life in another direction – this time a positive one. With gritty determination, she decided to take charge and change her situation.

Her husband, Oleh, looked for rehabilitation opportunities. Nataliya set out to prove her doctors wrong. She worked with therapists every day, spending hours building and training her muscles. She was persistent and pushed forward to become healthier and stronger. It took her two years to defy the prognosis and by 1998, she was able to sit upright again.

No longer helpless, she looked forward to a new life for herself. She found meaning and purpose caring for Oleh and Katia, cooking, cleaning, and gardening. She found comfort at home with her family and proved to herself that she could function and serve, despite her disability. 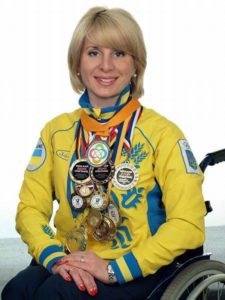 In addition to her regular therapy at home, every year, Nataliya traveled to Crimea to visit a specialized rehabilitation center. There, she met an athlete in 2006 who suggested she try Para Dance – seeing strength and possibility in her attitude, strength, and flexibility. He mentioned Nataliya to his teammates and coach.

In the world of Paralympics, Ukraine is one of the most successful and progressive countries. It operates the government-formed Ukrainian Centre of Physical Culture and Sport for People with Disabilities, also known as Invasport. At the time, Invasport was looking for candidates to bolster their Para Dance National Team. 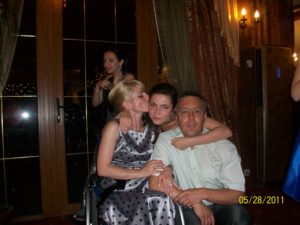 In 2008, two members of the national team approached Nataliya, attempting to convince her to participate in Para Dance (wheelchair ballroom dance).

Scared and limited by her own prejudices about her abilities, Nataliya turned them away. She didn’t believe she could dance.

Before they left, they asked her to watch a video, and she promised to do so. The video featured athletes on the Ukrainian National Paralympic Para Dance Sport Team competing with dancers from other countries. Her jaw literally dropped at their beauty, grace, and athleticism.

As she and Oleh watched, she began to feel shame and amazement. The shame came from her unwillingness to try, the amazement from how well the people in the video danced.

She agreed to attend a class, committing only to having fun and getting a good workout. 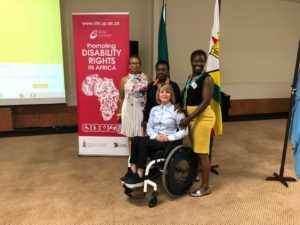 But on the first day, she was hooked. She loved how dance made her stronger and more flexible. She loved how feminine she felt gliding across the dance floor. She relished the challenge and felt alive with the promise of new opportunity.

With each class, she gained confidence. She wanted for herself the beauty and grace she saw in the video. She wanted to be on the floor, in a beautiful gown, moving gracefully to inspiring music. 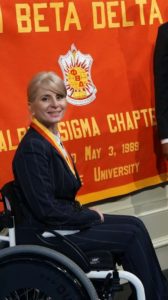 She worked daily to transform into an athlete and a dancer. Eventually, Nataliya decided to compete and began training at the Ukraine Paralympic Sport Center.

At first, finding a compatible partner was a challenge. She met a dancer named Andrii and thought he would be a good fit. But he was nervous to dance with someone in a wheelchair. Andrii watched as Nataliya and her teacher trained. He was inspired by her determination and decided to give it a try.

The pair embarked on intense training for nearly a year. Daily five-hour workouts developed a partnership defined by mutual respect, love of dance, and a drive to win.

They were fierce competitors.

Nataliya danced with Andrii in the finals at the Para Dance World Championship in Germany in 2010.

She loved every moment, every twist, turn, and graceful movement. Nataliya recognized that even with physical limitations, she was a powerful and exquisite woman.

This marked the beginning of what would become an impressive, and inspiring, dance career.

As a professional Para Dancer, Nataliya travels the world. She spent years using Google Maps on a laptop, dreaming of places she wished to visit. Now, her dance career takes her to competitions in Asia and Europe—and it was the first paying job she had in seven years.

From 2009-2017, Nataliya served as an athlete and instructor for Invasport. She won three gold medals in the 2017 World Para Dance Sport International Competition, a bronze in the 2016 IPC European Wheelchair Dance Championship, and a silver in the 2016 IPC Suomi Open Championship.

Success in Para Dance led to other opportunities. In Ukraine, Nataliya headed up the nonprofit, Rivne Region Public League of the Disabled, where she worked to spread awareness of the needs of the disabled community. She continues to work as a life coach and acts as an advocate for people with disabilities. She and her mother also created a company that sews gowns for Para Dance competitions.

Nataliya is proud of her achievements and embraces her disability. She lives by the phrase, “If you believe, you can achieve.” 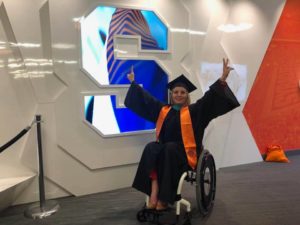 On May 9, 2017, Nataliya received her acceptance letter to Syracuse University to pursue a Master of Science in Education. She wanted to learn about inclusive leadership, strategies and theories about how best to work with students with disabilities. She is determined to dispel stereotypes and myths.

Of course, she brought her ballroom dance wheelchair with her to the United States, and discovered that Misha, her coach for one year in the Ukraine, worked for Fred Astaire Dance Studio.

FADS in Bloomfield Hills was honored to host Nataliya and Ivan Sovetov, her dancing partner from the Fred Astaire Studio in Syracuse, at its Para DanceTraining in July. She is currently working with FADS in Syracuse to develop a Para Dance program there. 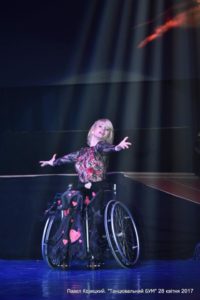 Nataliya earned her Master’s Degree from Syracuse University in May of this year and is poised to begin a PhD program in Teaching and Curriculum Development focusing on inclusion for people with disabilities. She’s also earned a spot in Maryland’s Open Society Foundations Professional Development program to study inclusive education strategies and disability rights advocacy.

Nataliya’s soul and heart are full, she radiates joy, she lives life to the fullest.

She is a shining example of how the best way out, is indeed, through.