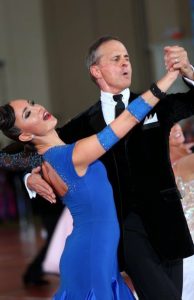 If you saw Michael Ziecik in a competition, you’d think he’d been dancing all his life.

The way he owns the dance floor, moves across it seamlessly and smoothly, the way he appears natural and at ease in his dance persona.

But Michael started dancing just three years ago, after his wife had been dancing for six months with us and invited him to join her in lessons. Six months after stepping foot in our studio, Michael registered for a dance competition, and he’s never looked back.

Michael first competed out of curiosity, then ramped up his frequency of lessons and dance parties to get more comfortable in competition mode.

“I went to a competition in Connecticut and I had fun,” he recalls. “I enjoyed it way more than I thought I would.”

He credits our studio environment with motivating him to take dance to the next level. “What struck me early on was that it is a very comfortable place to learn and make mistakes,” he says.

The Sport of Dance

A Bloomfield Hills-based commercial real estate advisor, Michael has always been an avid athlete. He continues to play golf and workout, and in addition to three lessons a week, he practices dance on his own. Sometimes he just stands in place, watching videos and trying to memorize movements or steps, to nail the nuances.

“A lot of dance requires repetition, so once you learn a hip movement or something, there’s not enough time in lessons to perfect that,” he explains. “It’s helpful to watch TV and do your hips in place or whatever the movement is.”

Michael loves competing. He also enjoys the process of learning how to dance. 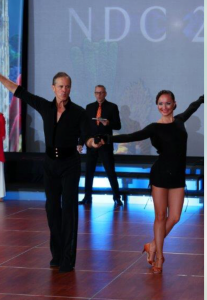 There are so many levels, he says. Just when you think you’ve nailed it, there’s another challenge ahead.

“You memorize steps, learn the steps correctly, learn to lead your partner and also work with a partner to dance. As a male, I have to lead, so I have to communicate with my partner through body movements. You don’t have time to talk. That’s one of the most difficult parts about it. Even for the pros, it takes years to perfect leading.”

“There is an appropriate, correct way to move around the floor with your partner, and at an amateur level, I get glimpses of it,” Michael says. “That’s the intriguing part – how do you move in tandem without interfering with each other, but yet connecting around the dance floor?”

The Mystery & Magic of Performing

Performing in a competition brought Michael out of his shell a bit. He insists you have to “show a little personality” when you perform, which he admits is not his strength. “I’m a business guy. It’s a different side of my brain,” he jokes. 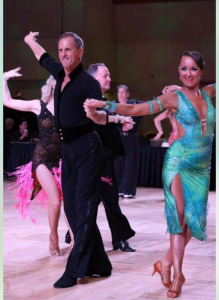 However, dance has helped him develop that side of himself. “There’s a whole other part of just existing besides thinking. Dance combines that if you let it.”

Michael has competed more than 10 times in three years. Like any sport, he says, practicing for a competition requires a high level of focus every day. He comes to the studio at night, after long work days.

The Community of Dance

Then, you go to the competition and reconnect with dancers you’ve met at previous competitions, ready to cheer each other on.

“I meet a lot of people,” he says. “I’ve gone to a lot of cities. Competing forces 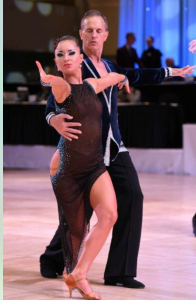 you to take breaks from your daily schedule. It’s a beautiful event. I love the music, I love the movement, I love watching others dance.”

He loves learning from dance coaches who come to our studio to guest-teach – and often show up as judges for dance competitions. “The coaches see you in a different light than your day-to-day instructors,” Michael notes. “It’s cool that they recognize you and take an interest in how you’re progressing.”

“The muscles, the movement, the leading, the following, the hands, the hips, the core – it’s great exercise, too,” Michael says, his enthusiasm for dance spilling over.