Have you heard that ballroom dance is helping sell household cleaning products?

It’s amazing how far the influence of this sport can reach. Last month, I read an article about Procter & Gamble Co. partnering with Maksim Chmerkovskiy, who was known as the “bad boy” on Dancing with the Stars. Chmerkovskiy is promoting the company’s Swiffer sweeper in YouTube videos, dancing with the cleaning instrument, suggesting that people like to dance while they clean their houses. 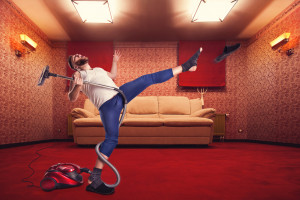 So I tip my hat to Procter & Gamble for using dance, with its sparkly public profile, to sell the 18th anniversary of the Swiffer. On DWTS, Chmerkovskiy was known for baring his chest while dancing. However, in the Swiffer commercials, he’s all covered in a black turtleneck, and raving about how using this product helps him clean his house quickly.

I have to say, I don’t think he really cleans his house. Just a hunch. But it sure is a great approach to sell what would otherwise be a pretty boring home product.

And by the way, everything comes back to Fred Astaire, right? In the commercial, Chmerkovskiy’s dance with the Swiffer as partner – and the five women who lined up behind him and each danced with a similar sweeper – evokes the dance scene from the movie, “Royal Wedding,” featuring none other than Fred Astaire partnered with a hat rack.

Procter & Gamble put out a statement that the videos were inspired by social media posts of regular Americans dancing with their Swiffers. That’s their story. But I like the Fred Astaire speculation better.