In the studio, at a TV station, wherever he goes, Tony Dovolani seems larger than life.

People gasp. They exclaim. They ask to take pictures with him that they promptly post on Instagram and Facebook. They ask questions about his time on Dancing With the Stars.

Or they just gaze at his charisma, his beauty, his air of confidence. 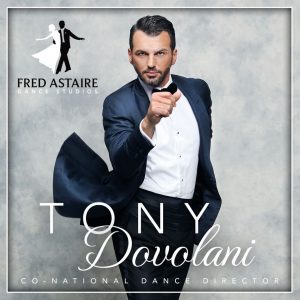 The truth about Tony Dovolani, though, is that he’s a very down-to-earth, approachable guy who simply loves to dance and share his passion for ballroom as national dance director for Fred Astaire Dance Studios nationwide.

For those who may not recognize his name, Tony Dovolani is an Albanian-born American professional ballroom dancer, instructor and judge who starred in Dancing with the Stars and also played the role of Slick Willy in the popular dance film, Shall We Dance?, for which he coached actress Jennifer Lopez.

Born in Kosovo, Tony began folk dancing at age 3 and by 15, he was living in America and studying ballroom dance. He was nominated for an Emmy for outstanding choreography with Dancing with the Stars in 2006 and he has won many awards for his own dance competitions throughout the years.

We are lucky to have Tony in our back pocket, guiding the instruction and curriculum of Fred Astaire Dance Studios across the country, and we’re lucky to welcome him to our two Michigan studios (and growing!) regularly, where our students eagerly sign up for time with him.

A Conversation with Tony Dovolani 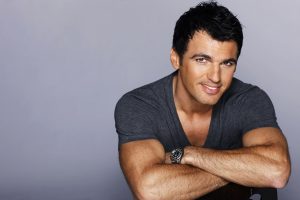 In a recent conversation about his vision in this relatively new role as national dance director, Tony said this: “For me, education is very important, so if I can provide education for all the council members, studio owners, teachers, students, we’ll achieve our goals.”

He’s committed to bringing in world champions to the Fred Astaire family, as well as sports psychologists, accomplished dance teachers, and people successful in their fields to “help us give better service to our students, teachers, owners, council members.”

We talked about how hot ballroom has been, and for a long time, wondering is that sustainable?

“It’s definitely sustainable,” Tony says. “We’re going in a new direction, too, becoming one of the only social outlets that people have. It surpasses country clubs, surpasses any restaurant because in no other place do you have social contact where the man is a gentleman and the woman is a lady.”

Importantly, ballroom dance gives us a return to etiquette, to manners, to respect, he says.

“Etiquette is a big part of our industry,” Tony says. “Creativity, athleticism drive ballroom dancing, and it’s going to be strong for many years to come.”

This fascination with and passion for ballroom “is a direct response to the aggression of our world today,” as well as the increasingly lonely way we feel by living so much on social media, he notes.

“We have gotten too technology-driven. People are longing for an actual social contact and not through 40 characters or less, but maybe rumba or cha cha.”

Mostly, though, Tony is thrilled by how publicly enthusiastic clients are about ballroom dance. “It’s no longer part of a secret society,” he says. “Students come in wanting certain experiences as they go through. And in return what they are discovering, is the true pill to youth is ballroom dancing.”

“It keeps you young, fit, healthy, and it keeps your mind sound because you’re always learning. Plus, dance gives you your own oasis, an escape from the chaos and rush of everyday society.”