Our Spring Showcase Is Right Around The Corner! 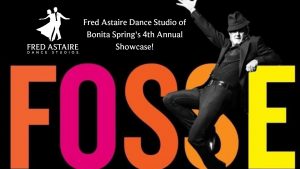 We’ve got an amazing show coming up and we are asking that you get your tickets now. Demand is high and seats are limited for the FOSSE Showcase on Sunday, April 14, from 4-6 p.m.

Bob Fosse was a multi-talented man who had a huge impact on Broadway and Hollywood.

Fosse won eight Tony Awards – the most by any individual – and added another for direction. He was also nominated for four Academy Awards, winning for his direction of Cabaret.

According to Wikipedia, Fosse, a Chicago native, moved to New York after World War II “with the ambition of being the new Fred Astaire.”

He choreographed his first musical in 1954 (The Pajama Game). Among his other triumphs were All That Jazz, a semi-autobiographical film) and Chicago. He died in 1987 at the age of 60, but his achievements and stylistic touches live on.

Speaking of great talent, we just have to mention that internationally recognized dancer and choreographer, Bruno Collins, is this year’s show director! This is Bruno’s fourth Showcase in a row with our studio and we couldn’t be more honored to have him on board!  For over thirty years, Bruno has touched every aspect of the dance business with his vision and innovation!

Bruno is a 7-time U.S. Theatrical Champion, 2-time World Cabaret Champion, 3- time Blackpool Cabaret Champion, U.S. American Rhythm Finalist and 5-time Fred Astaire Rhythm Champion. He has performed around the world, in top competitions and shows, as both a guest star performer and champion. In addition, he has been featured on PBS Championship Ballroom Dancing.

Tickets are available for the FOSSE Showcase at our front desk. They won’t last long. Get ‘em now!