Congratulations to our Freddy Ball winners! 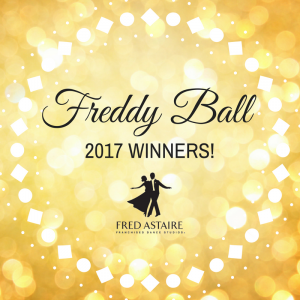 “Wow” is all we can say lately! Not only did studio owners, Kelle and David Chancellor, dance at the Valrico Fish Hawk Chamber of Commerce’s Annual Banquet, but they also brought home the award for Medium Business of the Year  2017! A big thank you to all of our wonderful students and hard working instructors who helped us make this possible!

Speaking of our students and instructors, we have some “congratulations” that are in order! The Freddy Ball competition and awards banquet are behind us, but that sweet glow of success and pride remains. Our studio was so wonderfully represented on and off the dance floor at this spectacular event.

We couldn’t be prouder of those who took part in the competition, and thanks to those who came out and supported our dancers.  We had a blast with at our Freddy Ball Awards Banquet, where we celebrated 2017 and our students’ accomplishments.

Dance is a joy and a pleasure, but competition can be as well. If you want to compete and take your devotion to dance to a higher level, then think about the Freddy Ball competition for next year. And the time to start working is now!

Our 2017 Freddy Ball Winners and Nominees:

We had a great time and we’re so proud of our winners! Check out some photos below!