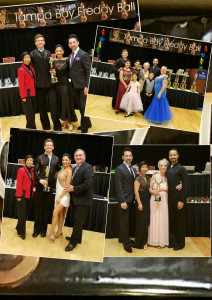 Even though we like to think of dancing as fun and relaxing, we do get a little competitive now and then.

We enjoy winning! And we enjoy winning at things we’re good at. So we had an especially wonderful time at the Freddy Ball and we came home with some hardware.

Freddy Ball is a regional competition, team match and awards banquet held annually on a Friday-Saturday in early February. This year it was Feb. 3-4 at the Hilton St. Petersburg Carillon Park. Brandon was Team Blue in the team match and earned several prestigious awards.

How about a hurrah and a huzzah for our winners and nominees:

Let’s also have a hand for our worthy nominees:

We had a great time at the Freddy Ball and we hope more of you will want to join us in competition – or as cheerleaders in the seats – at the next one.

We’re proud of our achievements and our achievers, and you should be too!