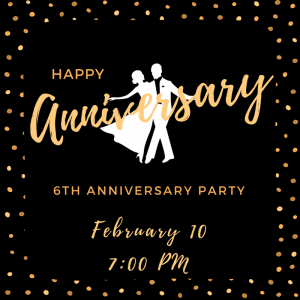 Fred Astaire Dance Studio of Brandon is celebrating its sixth anniversary on Feb. 10 with a special community party.

We officially opened our doors in the Brandon/Valrico area on Feb. 7, 2011, with just one student. Since that time, the studio has seen more than 1,000 students walk in and dance out!

Studio owner David Chancellor’s first student was Bridget Sardone, who continues her dance instruction to this day, and has even taken the position of the Brandon studio’s receptionist!

“I walked in that first day, and pretty much never left,” Bridget says. “The studio is so comfortable and Kelle and David make everyone feel so much like family that it’s really fun to stay and be a part of the excitement.”

Studio owners David and Kelle Chancellor relocated from the Tallahassee area, where they were both dance instructors at a Fred Astaire Dance Studio. Kelle had grown up in Brandon, and the dancing couple decided to bring the Fred Astaire name back to the area by opening their own studio. One of the reasons they made this move was so that they could fulfill their ballroom dance dreams, as well as their personal dreams for a family and children.

“Sharing the joy of dance with the community is our team’s passion,” Kelle says. “We hope to bring just a little bit of that joy to Brandon’s families, and help everyone meet their personal dancing goals.”

In the six years since its opening, Kelle and David have achieved honors and won numerous awards. David consistently wins top teacher in the Tampa Bay region, which includes the studios in Tampa, St. Petersburg and Clearwater. David has developed many excellent student competitors who consistently rank among the highest in competitions. He was a professional champion in the Novice division in his early career, and since has won titles in the Pre-champ and Open Rhythm divisions, as well as awards for most sessions taught and outstanding achievements.

Fred Astaire Dance Studio of Brandon is hosting its sixth anniversary party on Feb. 10  from 7-9 p.m. at the studio, located in the heart of Brandon. Everyone is welcome at no charge!

Don’t wear yourself out at this event.  Because we have another coming right behind it. It’s our Valentine’s party. It’s Friday, Feb. 17, from 7-9 p.m. It’s free! Check with us for more information.