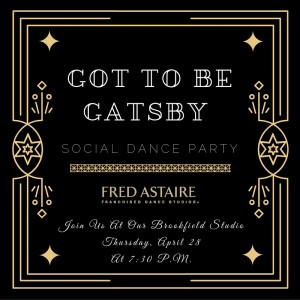 Was there ever a time that partied like the Roaring Twenties? Flappers, dandies, the birth of the jazz age, all marked an historic period that followed the end of World War I and included the banning (in theory) of alcohol in 1919, an economic boom and an eventual bust that became the Great Depression.

Say what you want, but it wasn’t boring.

We’re going to recapture a little of that flair and savoir faire with our Gatsby Social Dance Party at our Brookfield dance studio on Thursday, April 28 at 7:30 p.m.

This event costs only $35 for an individual or a couple to attend. Please dress in your best Great Gatsby attire – flapper costumes, suits, slacks, fine evening wear. Men, slick back that hair. The social dance party will transport you in time back to the Roaring Twenties and includes an MC, professional and student performances, beverages, hors d’oeuvres, and a lot of dancing.

The most popular dances in the 1920s were the foxtrot, waltz and American tango – all staples of Fred Astaire Dance Studio’s group and private classes with our outstanding instructors. The Charleston and Lindy Hop also had their devotees. So come and join us and twirl the night away on the dance floor in a way that would make Jay Gatsby and Daisy Buchanan jealous.