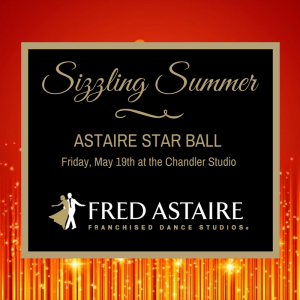 In our eyes, all of our students and instructors are stars.

We know how much you love dancing, how hard you work at this craft and what you contribute to the family feeling of our Chandler studio.

So it is only natural that we would have an event called the Sizzlin’ Summer Astaire Star Ball. It will be held on Friday, May 19, at the studio beginning at 7 p.m.

You’re going to love this. It is an event that students can come to for social dancing, an amazing dinner and some awesome student and professional performances. The price for all of this fun is just $15. Be a part of it.

A study published in the Public Library of Science’s genetics journal in 2006 suggested that long ago the ability to dance was actually connected to the ability to survive. Dancing, the study found, was a way that our prehistoric ancestors could bond and communicate. Scientists have therefore reasoned that early humans who were coordinated and rhythmic could have had an evolutionary advantage.

We’ve come a long way since then, but dance still is a magnet for many people and a way to create an attractive presence for the opposite sex. Stop in, sign up for a new ballroom dance class and build up that aura! You won’t regret it.

See you at the Sizzlin’ Summer Astaire Star Ball.