Cinco De Mayo Party and Special Guest Coach This May 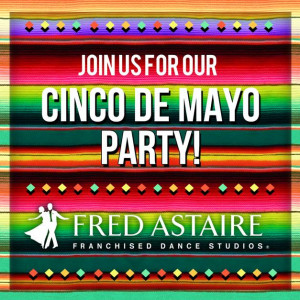 Feelin’ loco? Spice things up at our Cinco de Mayo Dance Party! Join us as we commemorate Mexican history by dancing the night away.

Latin music will be played during the event so make sure to bring the heat! Our party will be held at our Tucson dance studio on Thursday, May 4th.

Cinco de Mayo is Friday, May 5. The holiday honors the Mexican Army’s unlikely victory over French forces at the Battle of Puebla on May 5, 1862, under the leadership of General Ignacio Zaragoza.

Cinco de Mayo is seen as a day to celebrate the culture, achievements and experiences of people with a Mexican background, who live in the United States.

Some of the largest Cinco de Mayo celebrations are in the USA’s south-western regions! So join us for our Cinco De Mayo Party on Thursday, May 4th.

Don’t forget to ask your instructor about out Guest Coach this month, Kostadin Bidjourov, who has been awarded top teacher in the state of NJ more times than we can count! Here are a few of his outstanding titles:

Those are just a few of this highlights this month at our Tucson dance studio! For class schedules and other studio events, head over to the our calendar page.