Mister Bing’s An Evening on Broadway 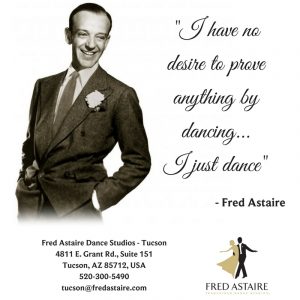 Mister Bing’s Supper Club has captured and recreated in Tucson, at Hacienda Del Sol Guest Ranch Resort the cabaret mood that brings out the best in our dancers.  We are looking forward to participating in these local events at such a high quality venue for ballroom dance.

Modern ballroom dance has its roots early in the 20th century, coincident with a wave of popular jazz music, and the move to partner dancing.  A burst of newly invented dances evolved, inspired by popular music, and international musical styles and folk dances. The categorization of dances as “ballroom dances” has always been fluid, with new dances or folk dances being added to or removed from the ballroom repertoire from time to time.

In the 1930s, the on-screen dance pairing of Fred Astaire and Ginger Rogers influenced all forms of dance.  Their filmed dance sequences have reached iconic status.  Much of Astaire and Rogers’ work portrayed social dancing, although the performances were highly choreographed, meticulously staged and rehearsed.

Fred Astaire Dance Studios, Tucson continues the tradition and methods of Ballroom dance instruction established by Mr. Astaire himself at his first studio back in 1947.

Check out our EVENTS page for more information!