We Welcome Two Very Talented Guest Coaches To The Tucson Studio This October!

Your Fred Astaire Dance Studio of Tucson is proud to announce the impending arrival of two outstanding guest coaches to augment the outstanding professional ballroom dance instruction we are known for.

We’ll be welcoming Gabriela Jileva to the studio on Monday, Oct. 2. You will want to book your session with her now. Her schedule is already filling up.

Gabriela Jileva started dancing and competing in Ballroom at the age of 10 in her native Bulgaria where she won National Open International Standard title and represented her country to the World Cup Championships in Vienna, Austria. After moving to the United States, Gaby continued her professional dancing in International Standard and added American Smooth to her repertoire in 2010. Over the last 16 years with the Fred Astaire organization, Gabriela has achieved many accolades, most recently:

With much found success in the dance business, Gaby currently enjoys traveling the country coaching, choreographing and adjudicating.

Gaby’s favorite thing about the dance business is the people. She loves helping to develop their talents no matter what level of dancer they are. “Seeing the excitement on their face, whether it’s because they just learned a box step or placed first in a National Competition is always a wonderful experience for a teacher to have. I don’t think I’ll ever get used to it,” she says. 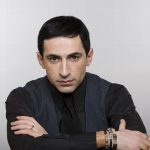 On Monday, Oct. 16, Ilya Ifraimov stops by to offer his expertise to our students. He coaches and adjudicates at all levels. He has also appeared on American Ballroom Challenge and The Real Housewives of New Jersey. Ilya is part of the prestigious Fred Astaire Dance Studios National Dance Board team that actively coaches our students and instructors in ballroom dance studio locations across our network.

Here are some of his amazing credentials:

Fred Astaire Dance Studio of Tucson offers the best in all forms of ballroom dance instruction through our own outstanding professional staff and now offers you the opportunity to work with internationally renowned stars of the dance world right here in Tucson.