Who was Fred Astaire 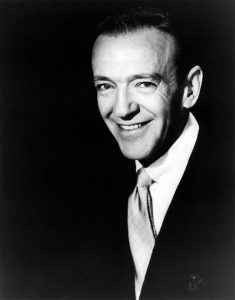 Who was Fred Astaire.

We named our Brookfield CT dance studio after him, so he must be important, right? In case you were wondering, Fred Astaire was an American film star and Broadway dancer.  He had a career that spanned 76 years! Not only that, he was a choreographer, singer, actor and musician who made 31 films, numerous recordings and several award winning television specials. Best known as the dancing partner and romantic interest for Ginger Rogers, Astaire is recognized by the American Film Institute as one of the Top 5 Greatest Male Stars of all Time.

Who was FRED ASTAIRE  EARLY YEARS

Born on May 10, 1899, in Omaha, Nebraska. Fred Astaire is regarded by many as the greatest popular music dancer of all time. He began performing at the age of five with his sister, Adele. The two siblings toured the vaudeville circuit until 1917 when they made it all the way to Broadway. They starred in many productions, including the 1927 hit, Funny Face, the critically-acclaimed musical by the legendary George and Ira Gershwin.

In 1932, things changed. His dance partner, Adele, decided to retire and get married to an aristocrat from England. Though he suffered a little without his usual partner, he decided to give acting a shot. He moved to Hollywood to see if he could make a career in film.

In 1933, Astaire landed a bit part in the movie, Dancing Lady with Joan Crawford. The role was a success that led to a contract with RKO Radio Pictures. It was there that he was paired with his longtime partner and fellow Broadway talent, Ginger Rogers. They first appeared in Flying Down to Rio in 1933. Though they were only cast as supporting actors. However,  their dance numbers was widely considered the show-stealing moment of the movie.

The duo would appear in several more films, including The Gay Divorcee (1934) and Top Hat (1935). Their unique dancing style combining ballet, ballroom and tap quickly made Astaire and Rogers Hollywood’s most beloved dancing duo.

A perfectionist, Astaire would rehearse scenes for days on end, and Rogers grew weary of the constant practice schedule. They decided to part ways following The Story of Vernon and Irene Castle in 1939. A decade later, they would reunite for The Barkleys of Broadway in 1949.

Who was Fred Astaire also performed with a number of famous actresses such as Leslie Caron, Cyd Charisse, and Rita Hayworth. As well as Judy Garland in Easter Parade and Audrey Hepburn in Funny Face.

As his film career wound down, Astaire took to the developing television market. He participated in tribute shows as himself. Also, he worked in dramatic roles in the series Dr. Kildare. He worked with another dancing legend, Gene Kelly, on That’s Entertainment, a documentary exploring the golden age of movie musicals.

Astaire received his lone Academy Award nomination for his supporting role in The Towering Inferno, a disaster film released in 1974. In 1978, he won an Emmy Award for his work on A Family Upside Down. Which was a television special about an elderly couple becoming more dependent on their children as their mental and physical health deteriorate. He received a Lifetime Achievement Award from the American Film Institute in 1981.

Some years later, Astaire was hospitalized with pneumonia. He died on June 22, 1987 in Los Angeles, California. Upon hearing the news, former actor and then President of the United States Ronald Regan called Astaire “an American Legend.” Ginger Rogers said of Astaire, “He was the best partner anyone could ever have.”

Source: Learn to dance with Fred