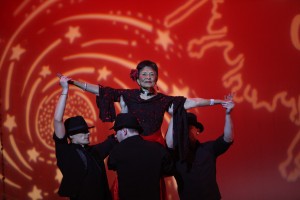 a world dance competitor at the age of 70! She has traveled the world for thirteen years with her dance partner, Alosha Anatoliy (owner of the Greensboro studio), to cities such as Moscow, Switzerland, Italy, and Paris.

Her career as a competitive dancer would be halted every now and then due to multiple heart attacks. In 2011, Julie suffered a heart attack that finally convinced doctors that she would need a pacemaker if she were to remain active. Thankfully, after a few days at the hospital, her doctor gave her the okay to keep dancing, and even prescribed it for her heart health.

Dancing with Fred Astaire has also helped Julie come out of her skin! Julie’s favorite memory from her long career of ballroom dancing also happens to be one of her most embarrassing. While waiting for her turn backstage at a competition, Julie couldn’t figure out how to unzip part of her outfit so she could use the restroom. So, she asked two strangers to help her out and went to get ready for her shining moment on stage. Once under the spotlight, she realized that the men who had helped her with her outfit were also her judges! She doesn’t remember what she placed that night in the competition, but she does remember that despite being embarrassed, she was just happy to be dancing!
Today, Julie attends lessons at Fred Astaire Dance Studio in Greensboro 2-3 times a week. Julie says the one hour drive from her home in Durham is worth it because of the friendly atmosphere and people at the studio. Julie’s circle of friends has continued to grow since she started dancing at Fred Astaire.

Julie’s goal is to dance until she is 100 years old. She is proud of her age and states that “if everyone can do what I do [at my age], they’re lucky!”