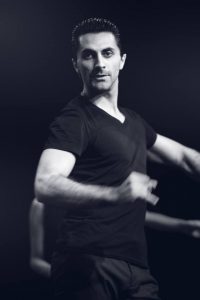 Arsen Sargsyan has a lot to say. Yet, sometimes he doesn’t have to speak a word. Instead, this accomplished dancer lets his body and his energy do the talking. And through the rich stories he conveys, he inspires audiences and students to approach dance in new ways.

Sargsyan’s inquisitive spirit and intuition for connection and meaning have guided his professional career. His broad training includes diverse dance disciplines and experiences. As an internationally accomplished performer, choreographer and teacher, Sargsyan is adept in folk dance, classical ballet and ballroom. Importantly, these disciplines inform his dynamic signature style, which is distinguished by ballet’s elegant lines, folk dance’s conveyance of deep emotion and ballroom’s sensitivity to partnership and personality.

Born in the Armenian capital of Yerevan in the late 1980s, Sargsyan has been dancing since the age of eight. His introduction to performing arts was an enrichment program that included everything from tap dancing, to juggling, to a youth performance of “Pinocchio.”

“As a kid, there was something very exciting about dancing ‘Pinocchio’ on our city’s big stage. It awakened an exuberant passion in me,” Sargsyan said.

Those early classes, however, required sacrifice. Hardships were unavoidable. There was devastation following a massive earthquake in 1988, as well as political turmoil, ethnic tensions, violent protests and economic instability related to Armenia’s break from the U.S.S.R. in 1991.

“In good times, I attended three classes per week. But when we didn’t have money, there were breaks,” Sargsyan said. “My parents did everything for my education and opportunities. But there were difficult situations: food shortages, earthquakes, no electricity and compromised resources. Looking back, I understand my parents’ sacrifices even more. Whatever I can do for them now, somehow I think it can never be enough.”

Sargsyan’s talent inspired his mother to enroll him in the Armenian National Dance Academy. As the country’s only professional dance conservatory, instruction was intense. Training included Armenian, Greek, Russian and gypsy folk dance and classical ballet.

“I loved folk music because it was so alive. The drum and piano spoke to each other passionately, with non-stop energy. No matter how tired we were, it made our bodies want to dance,” Sargsyan recalled.

Folk dancing’s vibrancy comes from people and their stories. Like American oral histories, folk dance preserves important cultural identities through its practice. It invites participants to experience stories in real ways. “When you dance with feeling, you’re not acting a role. It’s like you’re living the story,” Sargsyan said.

He reflected on folk dancing’s powerful emotional source. “Folk dance is about collective feelings and unifying emotions, larger than the individual. It might be about war, to show our people’s bravery and determination, or about our Christianity, or our nationality and love of country. Or it’s about joy of freedom and independence. The choreography might be about pain, like the Armenian genocide of 1915. That pain is an epic feeling. It’s bigger than one person’s sadness.” 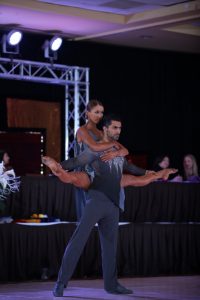 Through folk dancing, Sargsyan began to understand the stories that meant something to people. These stories defined cultures, but their emotions went deeper. They spoke of life and what it meant to be human – so they were powerfully universal. Sargsyan realized if folk dancing touched audiences this way, other dance disciplines could too.

Sargsyan’s ballet master, Hovhanes Divanyan, taught him to apply emotional sensitivity to performance: “He showed us how to reach people, how to look an audience in the eye and exchange energy, how to show life from the inside. On stage, his expression mesmerized, and his body screamed with energy. He taught us that dance was not just about movement. What touches an audience is story and soul.”

Without emotion, dance is dry. This lesson enables Sargsyan to touch the heart of any performance, with intensity and authenticity. His excellence in ballet is more than impeccable form and flawless technique. Likewise, his ballroom achievements reach beyond coordination, body speed and other qualities of sport.

While still a student, Sargsyan started performing with the Armenian National Opera and Ballet Theater. After graduation, the Israeli National Ballet recruited him to Tel Aviv. “Armenian ballet was very classical, but the Israeli approach was more modern, relaxed and elastic,” he said.

Sargsyan experienced challenge and growth in Israel. He expanded technique, explored meaning and rejected convention. Dancers were inspired to reinterpret the familiar. Choreography was daring and unexpected, but Sargsyan could always match it with striking emotional intention. This led to lead roles in “Don Quixote,” “Romeo and Juliet” and “Giselle.”

In 2012, Sargsyan came to New York to teach ballroom and ballet at Fred Astaire Dance Studio Mamaroneck. As a performer, competitor and teacher, Sargsyan’s interdisciplinary approach creates impact. The Fred Astaire corporation has recognized him as a regional top teacher, and his innovative choreography has impressed audiences and colleagues. In the studio, he is a popular and inspiring instructor.

Sargsyan’s favorite ballroom dance is Argentine tango. “It comes from real life experience, so it’s natural,” he said. “The lead and follow come from the soul, with feeling and connection in the dancers’ body energies. Depending on the music and partners’ intuition, the dance never feels the same. It has the variety and moods of life.”

“Keep a dance true to its base, but modernize it by adding something more. Look at movement from different perspectives. Apply conventions from different disciplines,” Sargsyan advised. “But most of all, find a way to feel it. … Feeling is what makes dance full – without it, dance is empty.”

Where do feeling and story come from? Sargsyan’s job is to open these sources so students find meaning and purpose in their dancing.

“Feeling starts with music,” he explained. “Whether it’s about love, despair, struggle or hope, music has character and soul. You find its story, or you imagine it. Words, visualization and partnership help. Then, if you connect that story with real emotions, it touches others.” 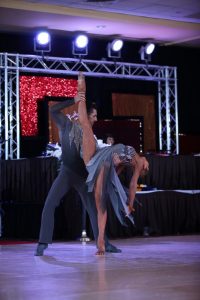 Sargsyan’s innovative approach is expanding traditional boundaries and opening up the definition of what ballroom dance can be. In bringing together various disciplines, Sargsyan’s work combines different voices, cultures and stories. This attitude and practice brings people together in positive and dynamic ways.

In addition to studio work, Sargsyan performs professionally and with students, nationwide. He supports Armenian cultural organizations, including the Shushi Armenian Dance collective, in New Jersey. This year’s gala included a special ensemble, “Im Hayastan,” (“My Armenia”) featuring Sargsyan in a folk/ballroom fusion. Its choreography showed that “Armenia is a small country [sized one-quarter of NY], but a big country, too. Through dance, we keep culture alive and build community.”

Just as “Im Hayastan” demonstrated how Armenia is greater than its modest size, Sargsyan similarly pushes his ballroom performances to exceed expectations. At a recent pro-am competition, Sargsyan and a junior student surprised judges with a non-traditional cha-cha set to “Freaks,” a techno-rap song by Savage and Timmy Trumpet. The unexpected music and bold choreography married hip-hop’s urban styling and signature pops, locks and glides with cha-cha’s flirty repertoire of Cuban motion, chassés and hip action. Costuming included jeans and sneakers, sacrilegious on ballroom floors. But Sargsyan knew what he was doing. Fearlessly, he stepped outside the box and delivered the dance’s soul. “Freaks” exploded with energy rippling through the room. It left everyone speechless.

Sargsyan’s approach makes him an incredible teacher. He imparts knowledge and craft, but he also guides students on explorations to find human stories they can relate to emotionally and express physically. The journey reaches beyond dance steps and engages a process of opening oneself and connecting with universal, human energy.

“This isn’t just a job. It’s my life,” Sargsyan said. “When you understand others; you understand yourself, and you can give more. I always listen to understand what my students want from dancing, so I can inspire and encourage. I show that I believe in them, giving them positive energy and positive identity. This is very motivating. This is what makes everything real.”

And then he paused, slightly, ready give more: “Dance should never be a demonstration. It’s got to mean something. No matter what, it’s got to have soul.”

This story was originally published in The Scarsdale Inquirer, Sept. 15, 2017.