The Winners: The 33rd Annual Fred and Adele Astaire Awards

Dancers and choreographers walked the red carpet last night at the NYU Skirball Center, all in anticipation for the night to come. With the spring theater season coming to an end, all were lined up to see who would take home an award from the prestigious 33rd Annual Fred and Adele Astaire Awards. Originally founded in 1982, the awards have been a showcase of talent, rewarding dancers and choreographers alike who have shown skill and excellence on the Broadway stage.
Eighteen nominated dancers attended the awards ceremony last night, many of whom had performed in Broadway hits such as “An American in Paris,” “On the Twentieth Century,” “Own the Town,” “The King and I” and “Finding Neverland.” Eight nominated choreographers attended as well, some for their great work in “An American in Paris” and “On the Twentieth Century” as well, along with others for their work in “Something Rotten!” and “The Last Ship.”

In a surprising turn of events, “An American in Paris” and “On the Town” nearly stole the entire show, featuring five award winners, with Best Male Dancer and Best Choreographer resulting in a tie! The winners from last night’s ceremony are as follows:

This is Cope’s sixth nomination she has ever received for An American in Paris and her first win.
Cope’s award winning performance was for her portrayal of Lise Dassin.

Best Male Dancer: Tony Yazbeck – “On the Town” and Robert Fairchild – “An American in Paris”

This is Yazbek’s second Astaire Award nomination and his first win. He was inspired to dance after watching Fred Astaire on TV at age 4 and began his career as a newsboy in “Gypsy” at age 11.

Fairchild has performed “An American in Paris” in Paris and on Broadway. He is also the recipient of the Mae L. Wien Award for Outstanding Promise.

Best Choreographer: Joshua Bergasse – “On the Town” and Christopher Wheeldon – “An American in Paris”

Bergasse is also known for his Emmy Award winning work for NBC’s “Smash.” He has also performed in Broadway hits such as “Movin’ Out,” “Hairspray,” “The Life” and “West Side Story.”Wheeldon’s inspiration for the choreography for “An American in Paris” is based on a concert of George and Ira Gershwin music he attended when he was 7.

During his long career, Khan has also been awarded The Laurence Olivier Award, The International Society for the Performing Arts Distinguished Artist Award, six Critic’s circle National Dance Awards and many others.

The awards ceremony also took a moment to honor two great gentlemen of Broadway. Joel Gray, an actor, playwright, director and producer, received the Lifetime Achievement Award for his amazing career. Harvey Weinstein, co-founder of The Weinstein Company, Dimensions Films and Miramax Films, was honored for Outstanding Contribution to Musical Theatre and Film. 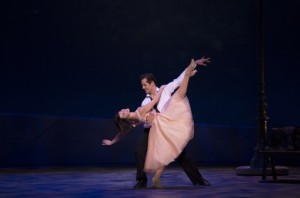 Several professionals from Fred Astaire Dance Studio in Connecticut had the opportunity to participate in the awards ceremony, including (From left to right) Jennifer Kirksmith, Anastasia Barhatova, Ecaterina Liubenco, Ashley Mokris and Anastasia Zhitova. 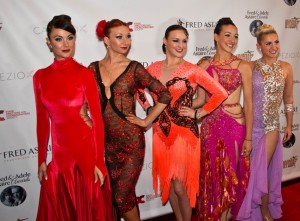 This grand showcase was made possible by Patricia Watt and The Douglass Watt Family Fund for the Performing Arts, a charitable fund for the Fred and Adele Astaire Awards and the creators of a Dance/Movement Therapy program for New York public schools.

Note: Fred Astaire Dance Studio Chairman Jack Rothweiler is a board member for the Fred and Adele Astaire Awards.