A little History of Mardi Gras

The great masquerade balls of earlier years were held in the richly decorated rooms of the city’s striking hotels, The St. Louis and the St. Charles, and public masked balls continued in theaters, ballrooms, and halls of several civic and social organizations. By the late 1800s dancing became a signature part of the celebrations, with the first quadrilles reserved for krewe [parade or ball organization] members, followed by general dancing, which lasted until the early hours of the morning. It was during the early dances that members distributed the lovely little pins now known as “krewe favors” to their lucky partners. These charming favors were tastefully crafted of sterling and enamel, and like the lavish invitations of the era, they reflected the theme of the ball. In 1897 Conus, who brought the first of his spectacular productions to the French Opera House in New Orleans, launched a brief, ten-year reign of displays never surpassed in lavishness, invention, or detail.

Fast Forward a hundred years and Mardi Gras in New Orleans is a spectacular party with parades, dancing, extravagant costumes and so much more. Now, the Mardi Gras festivities come to Menomonee Falls and the Fred Astaire Dance Studio on Thursday night. The “Mardi Gras” Party is a prelude to our regional competition “Winter Ball” which is being held at the Crown Plaza Hotel in Milwaukee on Feb. 26th – 28th. We will be dressing up to match the theme and having lots of fun as well as enjoying some performances from some of our students and professionals who are competing at the Winter Ball. Party with us tonight, Thursday the 19th! Our party begins at 7:30 p.m. and runs until 9 p.m. 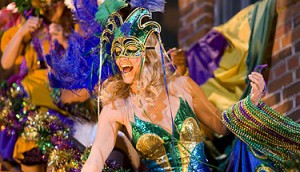