Get Ready To Burn This Disco Out! 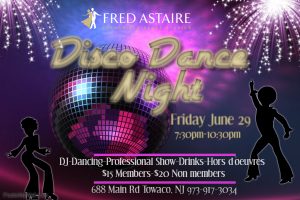 We jumped into the Wayback Machine to find this clip. Because we’re going back in time … https://www.youtube.com/watch?v=lX2FffaLdks

Yes, we actually have a Disco Party on Friday, June 29! We’ll have a DJ playing disco/hustle music as well as our usual variety of tunes. The party is open to the public, and it’s $15 for studio members and $20 for non-members. Drinks and hors d’oeuvres. The fun runs from 7:30-10:30 p.m.

So many great dances took off after the movie came back, and they’re still great fun today. The Latin Hustle, The Street Hustle and so many more still echo in our minds. The Hustle became a common name for a number of stylised moves. This partner-dance uses elaborate hand movements and funky twists and turns, influenced by the swing dancing of the 1930s and 40s. Other dances also influence the style of disco dancing such as the Latino moves of Mambo and Salsa!

Enjoy a little Friday Night Fever with us! Do the Hustle … right down to the Montville studio.