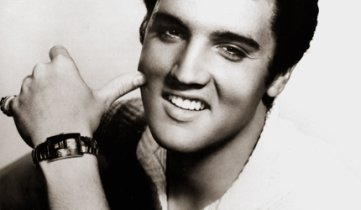 Today, January 8th, is the King of music’s 80th birthday, and Elvis tunes are still as fabulous and enjoyable as ever!

One of the 20th century’s most influential cultural icons, Elvis’ career spanned more than two decades!  His commercial success covered multiple musical genres such as blues, gospel and of course, pop. Having sold over 600 million units worldwide, Elvis Presley is the best selling solo artist in history.

“Jailhouse Rock” – Jive When the warden threw a party in the county jail, the inmates were definitely doing the Jive! This dance style, original to the United States, pairs terrifically with America’s original Rocker. Check out this clip from the BBC hit show, “Strictly Come Dancing” (think “Dancing with the Stars”) as competitors perform this high-octane dance to Presley’s timeless classic.

“Hound Dog” – East Coast Swing A rhythm dance with both 6- and 8-beat patterns, the East Coast Swing goes well with one of the more controversial hits from Elvis’ collection. Whether fans consider Presley’s 1956 hit a true cover or not, “Hound Dog” hits all the right notes to go with this fun dance with its distinguishing bounce, triple steps and swaying hip movements.

“Heartbreak Hotel” – West Coast Swing Well, we couldn’t leave out the left coast, could we? Unlike its more upbeat sibling from the east, West Coast Swing is considered a more formal, sensual dance where the dancers stay in a rectangular slot on the dance floor, moving in an up and down position. “Heartbreak Hotel’s” heavy reverberation and slow tempo make it a perfect fit.

“It’s Now or Never” – Rumba The slowest of the five competitive international ballroom dances, the Rumba’s slow movements blend well with one of Elvis’ most popular ballads. The song spent five weeks as the No. 1 record in the United States in 1960 and reappeared atop the British charts with its re-release in 2005. Check out this hot rendition from the 2010 Fred Astaire Dance Studio showcase.