No other artist has changed music and dance like our 1980s Dancer Who Defined a Decade! Who do you think it is?

Since he first took to the stage as a member of the famous “Jackson 5,” the music world has never been the same.

Michael Jackson, more commonly known as “The King of Pop,” was the 8th child born to the talented Jackson family in Gary, Indiana. It didn’t take long for his father to realize the musical talent brooding among his young sons, and in a move that would change the music world, he molded them into the family musical group called “The Jackson Five.”

Behind the scenes, Jackson’s father, Joe, pushed his sons to the limit in order to achieve success. Unfortunately, he didn’t handle the pressure as well himself, often turning to violence as a motivational tactic. Despite the hostile environment behind the curtain, the Jacksons gaining a strong local following and soon relocated to Los Angeles, where they achieved great national success! Chart-topping singles like “ABC”, “I’ll Be There”, and “I Want You Back” eventually gave Michael Jackson the recognition he needed to begin his solo career.

No single artist has eclipsed what Michael Jackson accomplished in the first years of his adult solo career. The world witnessed one musician enact change in the pop world in a way that nobody has since. In many ways, the 1980s were the highlight and pinnacle of Michael Jackson’s fame and success. Jackson’s landmark album “Thriller” was released in 1982 and had a resounding impact on music and the United States. Thriller produced seven hits that landed on the Billboard Top 10 list, and made the music video a viable art form instead of a promotional stunt. His savvy and artistic vision shattered preconceived notions about what a music album should sound like, but he didn’t just stop with the sound. Michael Jackson made waves in the dance world, as well!

In 1983, on a TV special––Motown 25: Yesterday, Today, Forever––Michael Jackson debuted his iconic dance move, the moonwalk. Unlike anything seen before, the moonwalk was a dance move that solidified Michael as a pop culture legend. It also epitomized the extent to which Michael would drive himself to succeed. He painstakingly practiced all of his dances and songs until he could not think of any other way to improve upon them.

After enormous success in the 1980s, the following years brought more challenges to the pop icon. Though the 1990s and 2000s didn’t quite measure up to the glamour and art he created in the 1980s, his untimely 2009 death came as a devastating shock and sparked a renewed interest in his unique music and dance. In fact, after his death, Jackson became the best-selling albums artist of 2009, selling over 8.2 million albums in the United States, and a total of 35 million albums worldwide. Jackson’s contribution to dance and to the art of music videos can still be felt today. His sharp precision, elegant spins, and effortless gliding across a stage influenced choreographers and creative dancers across all forms of dance, and can be seen in many types of ballroom dances.

Did You Know? It’s no secret that Fred Astaire was a major influence for Michael Jackson.  This can easily be seen through the look of Jackson’s “Smooth Criminal,” which heavily mirrors a segment of Astaire’s 1953 film, The Band Wagon. 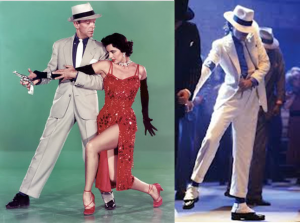