We are so lucky to be affiliated with this great, inspiring & talented man
who has had a profound and lasting effect on the art of ballroom dancing.

Fred Astaire Franchised Dance Studios continues to honor his legacy
with the same standard of excellence that he achieved on the dance floor.

A BRIEF BIOGRAPHY OF FRED ASTAIRE…

On May 10, 1899 a boy by the name of Frederick Austerlitz was born in Omaha Nebraska.

This boy would later on go on to become one of the greatest male stars of all time,
a dancing prodigy and change the history of dance on film.

This boy would go on to become none other than Fred Astaire.

Astaire’s career spanned over 76 years of his 88 year life.
During that time he made 31 musical films and changed the
way the country looked at dance on screen. He won three Emmy Awards,

one Academy Award and three Golden Globes in his lifetime among many other accolades.

He originally began his career partnered with his sister, Adele, as a vaudeville act.
They performed together until the 1930’s when Adele got married and retired from the stage.
It was then that Astaire paired with who would become his most well-known partner, Ginger Rogers.
Together they would make ten films and become known as
the greatest dance pairs to have ever graced the stage. 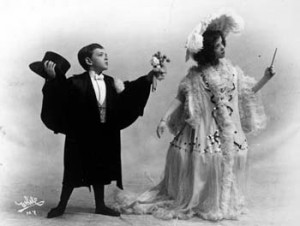 Astaire was known as a perfectionist. He would take weeks to rehearse his routines, ironing out every detail.
He once said, “I never yet got anything 100% right.” Though in watching his routines it would be hard
to say what he ever got wrong. After the filming of the Belle of New York in 1952 the directors wanted
to reshoot a scene with Astaire to change the costume and the setting. In watching the two scenes
side-by-side in a split screen they are identical. Astaire was so rehearsed his timing was perfect
in the retake compared to the original. Astaire passed away on June 22, 1987, but left us a legacy of music and dancing that is still alive today.
A performer of his caliber has not graced the stage since, but he has influenced the works of many
who have come after him. His work shaped the way dance was seen on the screen and his influence is still felt today. 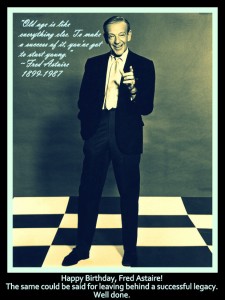 In 1947 he co-founded the Fred Astaire Dance Studio company. He took the elegance and glamour
of Hollywood and made it accessible to everyone as a way of preserving his dancing and passing it on.

“Some people seem to think that good dancers are born,” Astaire once observed,
“but all the good dancers I have known are taught or trained. To me, dancing
has always been fun. I enjoy every minute of it. I am glad that I can now put my
knowledge to use in bringing personal confidence and a feeling of
achievement to so many people.”