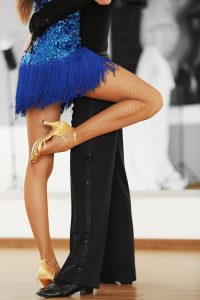 It’s a show so popular that it is known by its initials. Dancing with the Stars got off to a quiet start in the genre of competition shows but it has achieved a wide, loyal audience. With 20 seasons under its belt, it’s definitely a winner. Part of that is the Stars we have known or get to know and come to love. Here are the 5 top reasons why the celebs are willing to dance the night away in no particular order.

1. The Challenge. Think of the fast pace – and we’re not just talking the quickstep. New steps and new routines must be learned in a short time – not to mention the time given to costume design and fittings. Add this to an already busy schedule and it is challenging. It also helps the star gain core strength and sharpen their athletic abilities while they add a new skill to their repertoire. It’s a challenge and some stars embrace that challenge completely.

2. The Money. Start with rehearsals. Each contestant is reportedly paid $150,000 for six weeks of rehearsals and the first two shows. If they’re still dancing to the music in the weeks after that, they take in an extra $10,000 for the following week, $20,000 for the week after that and so on up the ladder. The winning contestant is said to receive $350,000. Not bad money for a dance-off!

3. The Image. Or, more likely, the opportunity to change your image. Think 2012’s Jaleel White, known as the geeky Steve Urkel on Family Matters. What a chance to show a completely different side of his personality and a different ability! Have you learned to like some of the less likable (or so you thought) stars? It doesn’t hurt that when the scores are given they get to speak directly to you – the audience!

4. The Audience. Speaking of audience – it’s huge. So DWTS is a great place to be whether you’re finding new fans for your team and teammates or building a new audience for yourself. For example, Katherine Jenkins was a classical singer in the UK – now American DWTS fans know her name and of her musical abilities.

5. Lose Weight. Yep, it’s a consideration. Both Kirstie Allen and Ricki Lake talked about how joining the show was also an effort to meet their weight loss goals. There’s not a doubt that DTWS doesn’t help burn calories!

Take to the dance floor and you can get the same benefits as the stars – well, except for the money. Challenge yourself, get fit, burn calories and show your audience a new you. Get started at Fred Astaire Dance Studios in Scottsdale and they’ll teach you all the moves you need to know to star in your own dance production!