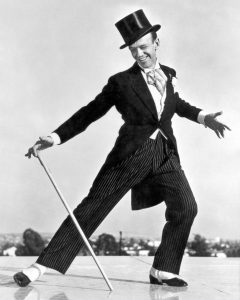 We’re named for him and you may be able to name his movies and his more famous partners like Ginger Rogers, but here are some things you may not know about Fred Astaire:

He started dancing for a very pragmatic reason. You may know that Fred Astaire began dancing professionally in 1905 with his sister, Adele. But then he started dance lessons for a reason every mother will understand.

His sister was taking dance lessons and his Mom didn’t want to have to pay for a babysitter so she sent Fred, too.

His first screen test wasn’t an overwhelming success. He was given the following evaluation. “Can’t act. Can’t sing. Balding. Can dance a little.” Turned out he could dance a lot!

A guest appearance you may have missed – Fred appears on the sleeve of The Beatles’ Sgt. Pepper’s Lonely Hearts Club Band album. Would seem he had fans in jolly ol’ England, too.

Nailed it on the first take. When Fred Astaire made a cameo in John Lennon and Yoko Ono’s film, Imagine, they were thrilled with his first take. He wasn’t. He was sure he could do better and asked to try again.

He and Gene Kelly danced together one time. Not counting the compilation movie, That’s Entertainment, Part II, Gene and Fred only shared one single dance. The routine was titled “The Babbitt and The Bromide,” and was in the 1948 movie, Ziegfeld Follies.

A signature move concealed what Fred thought was a fault. When he was dancing and his arms were outstretched he curled his middle two fingers in. Why? He thought it disguised his very large hands.

He may have tried to hide his hands, but he could never hide his talent. And, he taught the world to love dance. Visit Fred Astaire Dance Studios in Scottsdale and indulge in your love for the light fantastic. You’ll have fun, polish your skills, get great exercise – and make new friends! Join us and dance the night away!