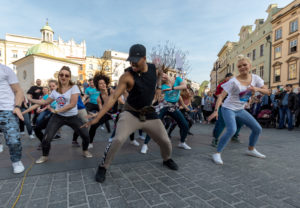 During this new era of social distancing and safety protocols, let’s take a walk down memory lane with the top 10 most-viewed dance flash mobs of all time.

Traditionally, dance flash mobs are when a group of people assemble in a public place to wow the crowd with an eye-catching dance routine. The first known flash mob took place in New York, New York, when Bill Wasik, a senior editor of Harper’s Magazine, encouraged people to gather at Macy’s Department Store. Others met up in a hotel lobby, and more pretended to be tourists on a bus trip. Over time, flash mobs have evolved to include elaborate dance performances, concerts or instrumental performances that wow crowds and provide people with a surprising break during their daily routine.

The outbreak of COVID-19 sent Americans into quarantine to help flatten the curve and stay safe. Even as states slowly reopen and people venture out in their communities, many public gatherings look decidedly different this year. Fred Astaire Dance Studios encourages people to take a few minutes out of their day to enjoy some famous flash mobs from days gone by.

2. On a snowy day in Moscow, a group of dancers perform to “Putting on the Ritz,” to the surprise of local commuters.

3. Forty students from the Jerusalem Academy of Music and Dance delighted doctors and patients as musicians and dancers performed Tchaikovsky’s “Waltz of the Flowers” at the new Sarah Wetsman Davidson Hospital Tower in Jerusalem.

4. Get in the holiday spirit with this first flash mob with nearly 54 million views. On November 13, 2010, unsuspecting shoppers got a big surprise while enjoying their lunch. Over 100 participants sang in this awesome Christmas flash mob.

5.  In this clip, dancers surprise guests at a British car show by highlighting the country’s music history.

7. On a beautiful day in Sydney, Australia, dancers gathered at the harbor to get their groove on to “Uptown Funk” by Mark Ronson.

8. To showcase Indian culture, costumed Bollywood dancers busted a move in the heart of New York City at Times Square in 2009. Dozens of Bollywood dancers turned out to honor “Bollywood Hero,” a three-part miniseries on the IFC channel.

9. A flash mob popped up in Seattle’s Westlake Park. The group performed to a popular song from the hit television show, “Glee.”

10. Last but certainly not least, check out this flash mob performing a dance tribute to Michael Jackson in Stockholm, Sweden.

If seeing dancers, musicians and singers strut their stuff on busy streets inspires you to hone your dance moves, contact Fred Astaire Dance Studios to learn more about their ballroom dance lineup. Fred Astaire Dance Studios offers ballroom dance lessons for individuals and couples at all ages and stages of their dancing journey. The Enfield, Connecticut-based dance studio franchisor prides itself on hosting dance classes taught by certified dance instructors in a warm and welcoming atmosphere. Ballroom dancing helps enrich lives by improving the physical, mental and social health of participants.