The roots of the Samba, both music and dance, come from the home of Brazil. In Brazil, the Samba is a solo dance performed by Carnaval dancers whereas for ballroom dancers the Samba is a partner dance.

The Samba originated in Bahia, Brazil at the beginning of the 20th century but became popular in Rio De Janeiro. When the Brazilian Samba was introduced to the US Dance Masters in 1929, it very quickly became an overnight sensation. Like many other Brazilian dances, the music is a fusion of both African and Latin American rhythms embellished with artistic and melodic lines. Once popular, the Samba’s intoxicating rhythms were taking up by serious Latin American composers. 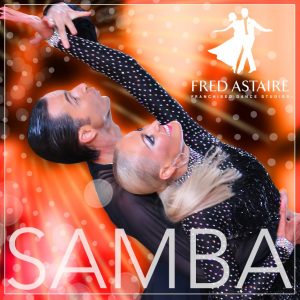 The Samba is lively and joyful and brings to mind images of Rio’s Carnival, though it is performed in all parts of the world today. In its’ native land, the Samba is typically danced to moderately slow tempo music, which contrasts very vividly with the spirited version that is favored in the US. Samba has withstood the test of time and still is reputed highly among both social and competitive dancers.

Samba is in essence a spot dance but progression is also made along the line of dance. The Samba is a dance that is constructed by many contrasting movements. The basis of the dance is controlled with a springy knee action called the “samba pulse,” an up and down feeling that is suggested within the music. The oppositional use of hip and rib cage movement has developed the Samba into a dance with many diverse forms of expression.

The Samba is a very fun and different dance to add into the repertoire so whether it’s your first time or your umpteenth, come join us for our Hips Don’t Lie Samba class or ask your teacher at Ridgefield Fred Astaire Dance Studio how YOU can start learning the Samba!