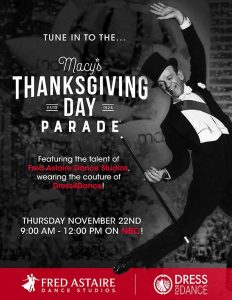 The annual Macy’s Thanksgiving Day Parade in New York City, the world’s largest parade, is presented by the U.S.-based department store chain Macy’s. The tradition started in 1924, tying it for the second-oldest Thanksgiving parade in the United States with America’s Thanksgiving Parade in Detroit. The three-hour Macy’s event is held in Manhattan starting at 9:00 a.m. Eastern Standard Time on Thanksgiving Day, and has been televised nationally on NBC since 1952.

We will certainly be in front of the TV to watch the parade and look for all of the FADS representatives, especially Anneliece and Kurt. Please wish them a good trip when you see them and let them know how proud you are of them!