The Quickstep, with its roots in Ragtime, was developed in the 1920’s in New York from a combination of Foxtrot, Charleston, Peabody and the One-Step. Originally it was danced solo – away from the partner, but later became a partner dance. It was originally given the name “Quick Time Fox Trot” but eventually that name was changed to Quickstep. The dance traveled to England and was developed into the dance that we know today, and was standardized in 1927. In a basic form Quickstep is a combination of walks and chasses but in an advanced stage hops jumps & many syncopations are utilized. It is an elegant and glamorous dance and body contact is maintained throughout the dance.

Would you like to learn the Quickstep? You’re in luck. Quickstep is this month’s Series Group Class at Fred Astaire Dance Studio South Metro. Come join us every Friday at 7pm during the month of September. 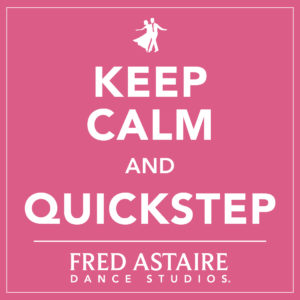