How Merengue Became the National Dance of the Dominican Republic

Tonight is the last night of the Merengue Series Class at the Eagan Fred Astaire Dance Studio. What will next month’s Series Class be? You’ll have to wait to find out. Until then, here’s a bit more history about Merengue. 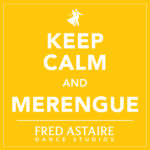 The original merengue was most likely very European in style but, because of the African influences on the island of Hispaniola, it acquired Afro-Caribbean rhythms, which livened up the dance. Immediately, the aristocracy denounced the merengue because of its relation to African music, but they were unable to stop the popularity of the dance as it spread across the Dominican Republic and Haiti.

A major influence on the merengue in the Dominican Republic was Rafael Trujillo, who became dictator in 1930 with the help of the United States. Trujillo always resented the aristocracy and disliked their control over music and how they prevented the lower classes from listening to music at their social clubs. Once Trujillo came to power, he strove to turn the rural, lower class merengue típico into a popular symbol. He ordered all radio and television broadcasts and urban dance bands to include merengue as part of their repertoire. In 1936, Trujillo made an official declaration making the Cibao merengue the official music and dance genre of the Dominican Republic.

Merengue would not make an international appearance until the 1980s. Dominicans were leaving their country and moving to New York City. They opened up dance clubs, and salsa venues were converted to merengue clubs. Merengue was highly marketable since Dominican bands would play longer and for less money. Since they 1990s, the popularity of merengue has decreased, while salsa has increased. Many dance clubs have started alternating between salsa and merengue bands.