Week 10: Get To Know Your FADS Team 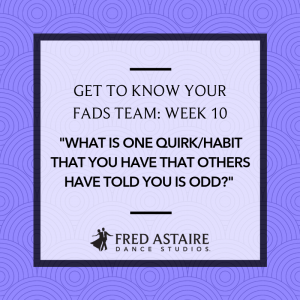 Week 10 Question:  “What is one quirk/habit that you have that others have told you is odd?”

Jason: I mumble and am picky about what side of the bed I sleep on.

Karli: That I flair my nostrils

Sydney: I have a tendency to pop my hips a lot…..like A LOT

Chris: I will never go out in public without a freshly shaven head 🙂

Anthony: One of the biggest quirks I have is being knowledgeable.  Doesn’t really seem like a quirk at first, but there have been instances where it has seemed weird to my friends.  Like when a new video game comes out and my friends jump right in and start playing, meanwhile I’m reading the manual on what the controls do and what spells I can cast.  I like the research just as much as the game which is why when there is an issues on rules or skills my friends say “I dunno, ask the wizard; Anthony usually knows how everything works.”  :D!!  Other times this has been weird is when one of my friends loses something and I happen to know where it is.  This happened recently at Alexis’s house when he got in the car and didn’t know where his sun glasses were.  I said, “They’re on the kitchen counter.  First thing on your right when you walk in.”
I genuinely don’t know how I knew they were there, I just remember things really well sometimes :D!!!!!

Justin: The ability to turn anything into a pun.

Denise: I scrunch my toes when I’m really deep in thought. I don’t realize I’m doing it unless I happen to look down mid-thought.

Kaylee: I pop my elbow and my hiccups and I make everything unnecessarily dramatic just by saying their name….

Philip: I think very logically and at times without emotion I don’t think it’s weird but some have told me it is.

Alexis Ornelas: If I have the palm of my left hand facing up and I fold my pinky in half, I can hold it flat to the left along the crease of the rest of my fingers.

Steffany: Every time I have a meal that includes French Fries, I have to eat my French Fries First. (I don’t like cold fries) I also enjoy dark and grim movies/stories/music/conversations. Many have told me it’s odd because I’m such a caring and nurturing person. 😀

Clarice Jacobson:  I have to watch everything with subtitles on.