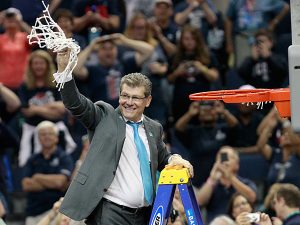 “We have to work this hard to make it look that easy,” said Geno Auriemma, UConn’s women’s basketball coach, again calling forth his Fred Astaire quotation following his team’s 37th consecutive win last night when the Huskies beat Notre Dame to seize their 10th NCAA tournament! This win, reporter Paul Doyle notes, ranks Auriemma alongside John Wooden and Phil Jackson (and perhaps even Fred Astaire?). At a March Middlesex Chamber of Commerce event, Auriemma explained how he uses his new refrain and the story behind it to inspire his team, attributing it to a conversation Astaire and Ginger Rogers had after a difficult dance rehearsal.

“I suppose I made it look easy, but gee whiz, did I work and worry.” – Fred Astaire