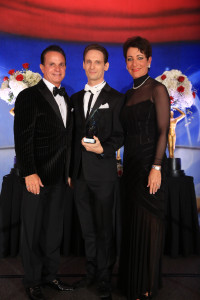 Three cheers for our own Andreas Luetzner!

Our well-respected co-owner was recently honored with the first Jean Marc Casanave Memorial Award, to be given annually to an individual who exemplifies those same traits as Jean Marc did – professionalism, honesty, integrity and loyalty.

Andreas was given the award at the recent Freddy Ball 2017, where our studio was named top studio of 2016.

“The way I knew Jean Marc is that he could make you feel like you knew him for 5 years even if you just knew him for 5 minutes, that’s something I liked about him. On the business side, he always motivated everyone around him to become the best, strive to be better. His gift was to motivate people. He was very special to me”, says Andreas.

Jean Marc Casanave, who passed away in January of 2016 at the age of 51, was the founder of several Fred Astaire Dance Studios. His grandfather, Charles Casanave, started the original studio in 1947 with Fred Astaire.

“He was a wonderful man; he was bigger than life and just a great person to be around. He was always there for us. If he didn’t have the time, he would make the time” says Andreas.

He was known for many wonderful traits – his kindness, his faith, his generosity of spirit, and his ability to make people feel loved, important, and valuable.

And that should tell those of you who don’t know Andreas that well, why he was honored with this award. He carries on Jean Marc’s tradition faithfully and with joy.

Andreas explains “At his memorial service, all I could think was “He was the best. He was the best in our region, in our industry, in our company. He was always dressed to a tee – super well dressed, every time I met him. For some reason I put the memorial card on my wall in my closet. It motivates me. It’s almost as if he looks down on me, as if he gave me the award. It’s such an honor to be awarded this, I feel like he passed this on to me and I hope I can carry it on”.

We, as Fred Astaire Dance Studio of West Palm Beach, are proud to have a co-owner who carries on such a legacy in our industry. Congratulations Andreas!