Dennis Reeb and Lori Slomovitz began taking lessons at Fred Astaire Westerville in June of 2016. With their one year danceversary approaching, they’re preparing to attend the Spring Gala on May 21st. This will be their first event outside of the Westerville studio, making it a very exciting new step on their dance journey. Naturally, they both feel a bit nervous. 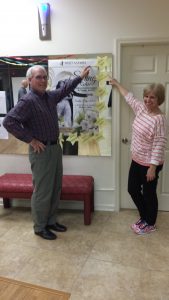 Their instructors were very avid in outlining how beneficial it is to participate in events. According to them, having a concrete goal to work towards greatly improves the progress you make on lessons. Throughout the last weeks and months, both Dennis and Lori have found this to be true. Striving to represent themselves as best as possible at the Spring Gala has increased their focus.
As this is their first event, their main expectation is to gain confidence through this experience. Truly, these are uncharted waters for the both of them. Additionally, they are both interested in discovering what it will feel like to dance in front of strangers as opposed to merely dancing in front of their friends at the Westerville studio. However, Dennis and Lori were able to spectate Freddy Ball in March, so they have an idea of approximately what crowd size to expect. Being able to witness an event as a spectator has assisted them in their preparations to perform.
So far, the greatest benefits of dancing for Dennis and Lori have been an increased confidence, exercise and the great friends they’ve been able to make. With what they’ve learned at Fred Astaire Westerville, they are able to confidently dance in social settings and feel good about how they look on the floor. One great aspect about dancing at the Westerville studio has been being able to participate in the Couple’s Club. It’s a laid-back atmosphere to dance with other couples and form closer friendships. It also provides them the opportunity to dance together, which is something they look forward to doing more in the future.