Deb and Tim Pindell have been dancing at the Fred Astaire Westerville studio since July 3rd, 2014. Both have achieved great success in their dancing, Deb’s success culminating in becoming closed smooth champion at last year’s Buckeye Ball. 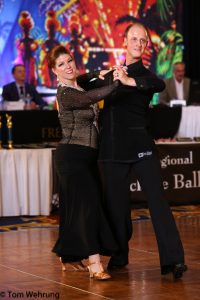 b first learned about Fred Astaire in her role as the chair of the Relay For Life planning committee. In 2014, Amy Jordan, the owner of Fred Astaire Westerville, brought a group of dancers to Relay For Life and did some demonstrations. Since she greatly enjoyed these demonstrations, Deb filled out a card that gave her a chance to win two free dance lessons. As luck would have it, she did indeed win.

Initially, Deb and Tim came in simply to take advantage of the free lessons they had won. However, by the end of the first lesson, Tim was all in. Fred Astaire Westerville instructor Samuel Walker asked one thought-provoking question at the end of that first lesson: ‘What do the two of you do together?’ As Deb thought about it she came to the realization: ‘Well we sit next to each other on the couch to watch TV. We sit next to each other in the car on the way to work and we sit across from each other at the table when we eat. So that made me think maybe we should do something active together.’

Of course, when the Pindells began taking lessons, Deb never would have imagined she would compete and even win a championship. They were merely dancing for fun. Eventually, Sam and Amy explained how important goal setting and competitions are in the Fred Astaire system. The concept of learning faster with a goal in mind made sense to the Pindells and so they signed up for their first competition, which was Team Match 2014. They had so much fun that they then participated in Freddy Ball and Buckeye Ball 2015.

These events were crucial in sparking a competitive desire in Deb: ‘At these events I watched the championship style of entries. I felt like participating in them would help me gauge where I’m at compared to people who are working towards the same goal. So, I entered Buckeye Ball 2016 and did the championships. Smooth day went incredibly well and I ended up winning.’

Of course, Deb’s success didn’t magically come over night. It required a substantial time commitment. Truly, if a dancer desires to reach a competitive level, they can’t simply treat dancing as a hobby. Deb describes the secret to success thusly: ‘You must get more intense about your practice habits and attendance. Even now, we don’t take a huge number of lessons, but we frequently come to the studio and spend our own time practicing, rather than only working at it on our lessons.’ 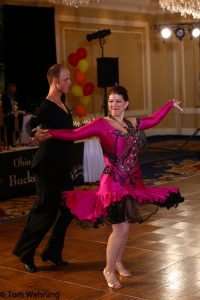 ugh she felt very confident about the way she danced at Buckeye Ball 2016, Deb was surprised to be announced champion. This was mostly since her competitors had been dancing longer than she had. However, it was very validating to know that all her effort was clearly visible on the dance floor. Tim and Deb are also both musicians which obviously helps them a lot with understanding timing.

Deb’s instructor Sam was incredibly please with the result she was able to achieve at Buckeye Ball: ‘It’s always such a pleasure to dance with Deb. She’s committed, talented and a very hard worker. Seeing her develop so quickly has truly been a testament to her hard work. Without exception, it is always fun to dance with her. Even when we were doing championship entries, the focus wasn’t on winning, it was on having fun.’

Today, the Pindells are still greatly enjoying the benefits of dancing together. It’s time they can spend together. It’s exercise as well as mental activity, making it a valuable experience.

Naturally, a big part of a student’s success is the strength of the teacher. According to Deb, one of Sam’s greatest strengths is his versatility: ‘Sam can teach any way somebody needs to learn. If you need a detailed explanation or a demonstration, he’s very good at reaching in and figuring out how best to approach things. He can give you the fine detail when you need it, or the overview when you need to see the big picture.’

Deb runs the mail and copy centers at Otterbein University. Besides dancing, she is also very involved in Relay For Life, having functioned as chair of the planning committee in past years. In addition, Deb and Tim also have three dogs which they love spending time with.

Over the years, the Pindells have contributed so much to Fred Astaire Westerville. No one is more grateful for that than studio owner Amy Jordan: ‘Deb has lots of spunk. She’s a great person to have in our studio. Both Tim and Deb are such assets. They’re consistent, they attend all our group classes and parties. They’ve become an essential part of our team. Deb works hard on her dancing and it shows. She’s truly an artist who always strives to be better. She understands what it takes to be a fabulous dancer and she took the steps to achieve that. Now thanks to her hard work, everybody sees what a beautiful dancer sh 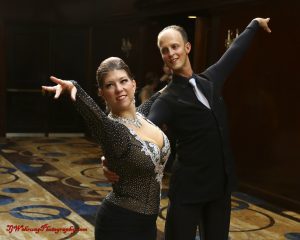