Our Beautiful Dancers on the Big Screen!

Our first Fred on Red Premiere Film Festival Season concluded with our Fred On Red Awards Show,  the Red Carpet Event ” A YEAR OF FIRSTS”.

Students all year have stepped onto the big screen for the first time ever with our new Fred on Red Dance Videos conceived by Taliat Tarsinov and produced by The Powell studio team and Tyler Cox of Farmbrooks Media.

We had close to 30 dance films being showcased for the first time at three Premiere Film Festival events. This Year of Firsts recognized outstanding achievements at our very first “Fred on Red Awards Show”. Dance Actors along with their videos were recognized at this prestigious red carpet event in over 15 different film categories from Top Dance Actor/Actress – Costuming- Music to Top Video of the Year!

Nominees will be announced at each of the Premiere Film Festivals this month. The Red Carpet Event will be partially produced by  Farmbrooks Media lead by owner Tyler Cox who will create special video presentations of the films/people. Taliat Tarsinov, creative visionary of the concept along with the Powell Fred Astaire team were in attendance, along with an A-List of presenters as we recognize a year of outstanding dance works from all of these amateur dancers. The show was also live-streamed during the Red Carpet Cocktail hour with viewers voting their favorites in the award categories during the show! 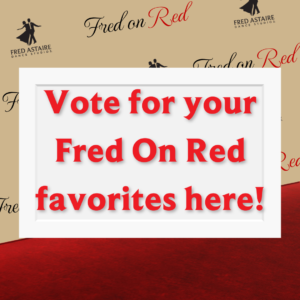