Over the years, I’ve been asked by many people why I stayed in the dance business for such a long time. When anyone’s asked this question, it’s usually because they were under the impression that people are only Dance Teachers part-time, or that they’re just waiting for a better job to come along.  After a conversation about how much I love this business and what it has done for me, they would look at me inquisitively and say “Oh, wow…I wish I would have known that when I started looking for a job,” and “Do you know of anyone hiring people like myself?” Without getting into the details of responses to their specific questions, I’d like to give you my rendition of how these conversations typically went – on airplanes and in airports, at conferences or in waiting rooms – with the example below of a conversation I had with a young man during a flight to a FADS National Dance Competition a few years back. I use it because it perfectly sums up how I felt from the beginning of my career with Fred Astaire Dance Studios, until my retirement this year.

JR: I notice you’re intently working on your spreadsheets, are you an Accountant?

A: I am a Data Analyst for a major company, and we’re in the process of analyzing a new product by trying it out in a few locations before we launch it.

JR: How long have you been involved in this type of field?

A: Eight years.  I loved it in the beginning, but now I feel that year after year, it has almost become repetitious. Different projects, all centered on the same skills, no challenges or creativity.  I think I may be ready for something new… spread my wings, so to say. What do you do?

JR: Taking your words, I have been “spreading my wings” in my business for 55 years, and the funny thing is that my wings have never gotten tired. I could never have known back then what would be in front of me 55 years later. When I say to people, “I’ve been working for Fred Astaire Dance Studios”, they look at me a little puzzled and say, “Can you really work full-time in a job like that?” I just laugh and say that my parents thought the same. I laughed then, too. And years later, when they came to visit at an event we were putting on, they were absolutely astonished at how prestigious and large the Fred Astaire Dance Studios network was.

A: I cannot believe you can work at a dance studio for that long of a period of time!

JR: It’s funny you say that, I’ve never thought, ever, that it’s been a long period of time. At the beginning of each New Year, I review the past year and say to myself, “I can’t believe I got through all the other years without knowing what I’ve just learned.” In reality, this is the type of business that completely reinvents itself each year with new business acumen, better grasp of communications and better goals. Your skills are challenged, you become more motivated and have a clearer picture of where you are going with your future. There is endless opportunity to travel, great opportunity for growth and the earning opportunities are fantastic. I would have never dreamed that I would wind up in the dance business. I walked into a Fred Astaire Dance Studio wanting to learn a few steps, and have since learned everything there is about dancing. And if I may say so… I’m a pretty good dancer. I became a Manager, wound up owning a Studio, then five Studios, then I became the Area Director for all of New England, bought stock in the company, became one of its Owners, and as I sit here talking to you, I am now the President. I could talk to you about the benefits, rewards and satisfaction that are part of a career with Fred Astaire Dance Studios, but we would be 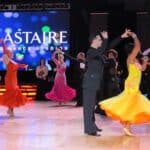 talking until the end of this 4-hour flight and still cover only a small fraction of what I’ve been involved in. Why did you get involved in your field?

A: I’ve always liked working with figures, solving problems and being around people. I went to a university, which I loved, majored in Economics and landed a job with my present employer, IBM.  I enjoyed my work environment, the people that I was meeting and was learning far more than I was ever taught in school. However, after about 6 years things started to settle in and everything was more or less on auto-pilot. Now, 2 years later, it’s hitting me like a rock: do I still want to be doing the same thing with the same type of people and so on, for the rest of my life? I feel I have a lot of growth potential and a lot to offer, however as I look at my present position there is a limit that I will reach and I feel I’ll regret it if I don’t try to find something that I have a passion for, something creative and more entrepreneurial that will bring out all my attributes.

JR: I understand what you mean, when I was a Dance Teacher, regardless of whether I was teaching a single student or a couple, so many of them expressed the same thing. Then when I’d meet them a few years later, I would ask how & what they were doing – and the answer from the vast majority was, “still doing the same old thing.”  And I’d continue by reminding them what we’d talked about when we last saw each other.

A: I could never do something like that. I don’t dance that well… I can get by, but I’m not real good at it and don’t feel that I could fit in. Plus, it is probably a little too late for me now… I am almost 29.

JR: I was 22 when I started, and was still learning to dance at your age, even though I was already teaching. I’m sure I mentioned before that I couldn’t dance at all. In fact, I was pitiful! I wish I would have known before age 22, how easy learning to dance would be. Being a good dancer is not about being physically skilled, it’s more about attitude and wanting more for yourself. We teach students all the time and many of them become really good, so it goes without saying that we can do that for our dance teachers as well. And even better, if you set your sights on owning your own Studio, there’s a comprehensive training program and ongoing support to ensure you’ll have the same opportunities for growth and success that I’ve had.

It’s funny now when I think back on that particular conversation, how many people still then didn’t realize how great the ballroom dance instruction business is. Unfortunately, the dance industry isn’t always on the radar screen of “good jobs” to be involved with, which is NOT as it should be.  Thankfully, that’s changing – with the burgeoning popularity of ballroom dance on television, in Hollywood movies, at wedding receptions – more and more people are now getting involved in our field as Dance Instructors, Studio Managers, and Studio Owners. It’s exciting! And that got me, well… dancing.