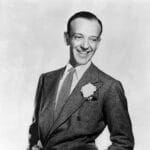 Fred Astaire’s iconic talents as a professional dancer wouldn’t have been possible if not for his numerous & talented dance partners. Ginger Rogers may have been the most well-known, but our co-founder and namesake was fortunate to have had the opportunity to star with numerous dancers on both stage and screen. This post celebrates two dancing powerhouses with November birthdays, with whom Fred Astaire partnered – Eleanor Powell and Petula Clark, and LeRoy Daniels, a Los Angeles shoeshine man who parlayed his entrepreneurial AND dancing skills into a Hollywood performance with Fred Astaire himself!

Born on November 15, 1932 in Surrey, England, UK: British pop singer, actress and composer, Petula Sally Olwen Clark. Her career started in 1939 in music halls and on BBC radio, singing for the British troops during WWII. She was the first female singing star to have her own BBC TV series (1946), and was a child star in British films through the early 1950s. By 1954 was recording hit records throughout Europe, and she became a sensation in America with “Downtown” topping the charts in 1965, making her the first British female singer to sell a million copies in the USA. Clark was 35 years-old when she was cast in “Finian’s Rainbow” (1968) with Fred Astaire, which she described as, “a wonderful experience, really kind of great.” Her performance earned her a Golden Globe nomination, and she also has three Grammy awards. In 2013 at the age of 80, Petula was back with a new album in the UK, and is still touring professionally.

Born on November 21, 1912: American dancer and actor, Eleanor Torrey Powell. Best remembered for her solo tap numbers in 1930’s & 40’S musical films, Powell was one of MGM’s top dancing stars during the Golden Age of Hollywood, and is credited with making the studio, which was hea ded for bankruptcy in the late 1930s, profitable again. Her dance talent is believed to be equaled only by Fred Astaire. The two starred in one movie together, “Broadway Melody of 1940”, (Astaire’s first after splitting with Ginger Rogers), which featured an acclaimed musical score by Cole Porter, and one of the greatest tap sequences in film history (to Porter’s “Begin the Beguine”). In his autobiography, Astaire remarked, “she ‘put ’em down like a man’, no ricky-ticky-sissy stuff with Ellie. She really knocked out a tap dance in a class by herself.” Eleanor Powell made her final public appearance in 1981, at a televised American Film Institute tribute to Fred Astaire. For more information on Eleanor Powell’s story, click here. Born on November 28, 1928 in Oklahoma: LeRoy Daniels, an enterprising entrepreneur who, to promote his downtown LA shoeshine stand, put on a show as he shined customers’ shoes… creating complex rhythms with his brushes, popping his polishing rag in time to the music, and dancing. To read the amazing story of how he parlayed that talent into a Hollywood movie role, and a dance scene with Fred Astaire in the classic 1953 musical film, “The Band Wagon”, click here.