Did You Know Dancing Can Reduce The Onset of Dementia? | Fred Astaire
Skip to content

Did You Know Dancing Can Reduce The Onset of Dementia? 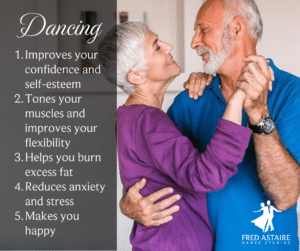 Fred Astaire Dance Studios encourages seniors to start dancing to stay in shape, have fun and help stave off Alzheimer’s disease and dementia.

While there is no cure for Alzheimer’s at this time, studies reveal dancing can help improve the quality of life of individuals suffering from dementia. A study from the New England Journal of Medicine revealed dancing can reduce the onset of dementia. The study determined people who participated in leisure activities, such as dancing, reading, board games and playing musical instruments, had a lower risk of dementia. The study followed approximately 470 individuals over a 21-year period. A smaller study revealed dancing can also improve the mood of individuals already suffering with dementia, according to the East London NHS Foundation Trust.

Many elderly individuals spend a significant portion of their day alone. Nearly 16.6 million Americans age 60 and older live alone, according to Pew Research. Heading out to a dance class is a great way to interact safely with people who share your interests. If concerns over COVID-19 are keeping you from playing cards with friends, canceling pickleball games and limiting church activities, Fred Astaire Dance Studios has an option to keep you active. Our Online Lesson Platform allows you to live-stream dance lessons straight from your living room!

Ballroom dance can be an effective (& fun!) therapy for those impacted by the symptoms of Alzheimer’s, whether in the studio or at home, and it’s even more impactful when enjoyed with a loved one.