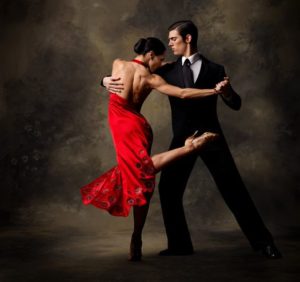 Heat up your summer evenings with your favorite partner by letting the professionals at Fred Astaire Dance Studios teach you the tango; a steamy dance that roared onto the dance scene in the 1920s. Holding a red rose between your teeth is optional.

The tango has its roots in brothels and dance halls of the urban lower class in Buenos Aires and Montevideo, Uruguay, in an area known as the Rio de la Plata basin, according to the United Nations Educational, Scientific and Cultural Organization, or UNESCO. The romantic dance combines the cultural diversity of the people living in the area, including European immigrants, descendants of African slaves and natives of the region. It merges aspects of the flamenco dance and the sensual characteristics of the milonga, a dance from Argentina. The tango gained popularity during the Roaring 20s, a special time of prosperity in the United States following the end of World War I. The Tango is a close partner dance featuring a staccato movement of the feet and flexed knees. It is a dramatic dance with measured crossing and flexing steps and poised pauses.

Holding a red rose between your teeth during the dance became a humorous tango trend following a 1920s film starring Rudolph Valentino, whose partner danced with a rose, according to reports. Professional ballroom dancers ditched the iconic red rose to concentrate on their fancy footwork.

To experience the romance and intricate footwork of the tango, check out some of these popular on-screen performances.

In the movie, “Scent of a Woman,” Al Pacino stars as a blind military veteran. During one of the movie’s iconic scenes, he charms actor Gabrielle Anwar by teaching her to tango.

In “Addams Family Values,” Morticia and Gomez Addams, played by Angelica Huston and Raul Julia, perform a romantic tango. The creepy characters in the movie are based on a television series that was popular in the 1960s.

We offer private and group lessons so you can learn to Tango at your own speed. Recognizing new social distancing guidelines, Fred Astaire Dance Studios also offers an Online Dance Platform allowing you to learn the tango from the comfort of your own home. Contact us to schedule a lesson.